Wednesday, December 8
You are at:Home»News»Sarawak»There’s a bright future for sago, says Taib 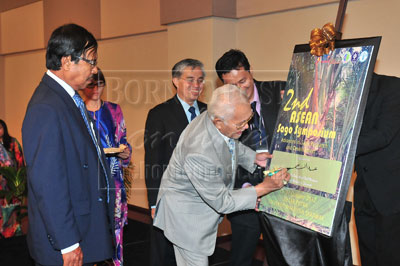 KOTA SAMARAHAN:  The state is intensifying its research on planting sago in estates-like plantations to increase production in a more cost-effective way.

Chief Minister Pehin Sri Abdul Taib Mahmud yesterday said the crop has a bright future to become an important commodity on par with palm oil due to its starch which can be used to produce many products.

A total of 100 acres of land in Mukah Division have been allocated for the experimental research to be conducted by Universiti Malaysia Sarawak (Unimas). The government has also embarked on advanced consumer and scientific research to maximise the commercial potential of sago.

“The country tends to concentrate on cash crops that can be produced in scientific and cheaper manner. This is what makes palm oil very popular. With proper research, sago can achieve the same success. Although sago research is relatively new compared to other commodities, it is going to become very important in the future.

“In the area of consumer research, basic question on how to increase production to be much more methodical, scientifically and more cost-efficient cannot be left untouched,” he highlighted when officiating at the 2nd Asean Sago Symposium; Advances in Sago research and development at DeTAR Putra, Unimas here.

Considering that sago grows on marginal soil which is mainly inundated by water, Taib who highlighted the need to propagate the crop much more, suggested that areas which were not very productive in the commercial sense be devoted for the growing of the crop.

He believed that the planting of sago in the state could be doubled in the Melanau populated areas, Saratok and Sri Aman areas. He also suggested for researchers to look at the possibility of cloning higher yielding species from Papua New Guinea.

“The experiment in Mukah should be taken a look at while researchers see what needed to be done to improve it. The experiment has enabled the state to arrange a proper water management while at the same time, getting good transportation system.

“Also to be given due consideration is the harvesting of sago which is still proven to be quite difficult. The government has to find ways to harvest sago more efficiently as local labour sources decreased due to urbanisation factor and shifting working trend among the youths from the agriculture sector to other industries as a result of human capital development.

“We need to encourage the people to be involved in the productivity of sago. While the consumer research is still going on, methods on improving labour and productivity in the sago industry should be looked into as well,” Taib pointed out.

He encouraged local researchers to continue involving countries such as Indonesia, Philippines and even Papua New Guinea (due to its emerging sago industry) in their research.