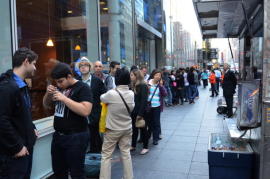 The line for an iPhone 5 at the Fifth Avenue Apple store in New York City in September, the iPad Mini is expected to attract Apple fans as well. (Credit: Greg Sandoval/CNET)

Even with a larger-scale launch that includes the full-size, fourth-gen iPad, Apple could see smaller sales numbers with the iPad Mini compared with iPads past.

For the second time this year, Apple is launching a new tablet, though the event looks to be dramatically different from last time around.

For one, Apple is actually launching two different devices: a new version of its full-size iPad that replaces the one Apple launched just seven and a half months ago, and its new iPad Mini. The launch is also larger, with both devices debuting in 34 countries — more than triple the 10 countries in which the iPad launched back in March.

All this would suggest that Apple is set for a record sales weekend. But not everyone’s convinced.

In a note to investors today, Piper Jaffray analyst Gene Munster offered his own estimate of 1 million to 1.5 million iPad Minis sold during the product’s first weekend on the market. That would be half, or less, than the 3 million third-gen iPads sold by Apple during that product’s opening weekend earlier this year.

Munster explained the smaller number by saying consumers might be holding out for the cellular wireless version (which arrives later this month), and that they might hesitate to buy the Mini because of the “newness” of smaller tablet sizes.

“We believe that over time that will change, and consumers will gradually realize the benefits of the smaller form factor iPad, which will drive adoption, although it may not take form in lines for tomorrow’s launch,” Munster wrote.

One other thing that could affect Apple’s initial sales in the U.S. is the aftermath of Hurricane Sandy, which has left much of New York, and other parts of the East Coast with flooding,power outages, and damage to roads and other infrastructure.

None of the five Apple retail stores in New York City answered calls today, and Apple posted signs on both its SoHo and West 14th Street stores noting that they were closed because of extreme weather and would remain shut till “conditions improve.” It’s the same for Apple’s retail store in Atlantic City, N.J. Nonetheless, Apple’s store in New York’s Grand Central Terminal is reportedly open again. Apple declined to comment on whether it would sell the device in that region tomorrow.

For Mini, growth is long-term

Launch weekend aside, many analysts believe the bigger story is in how well the Mini could do for Apple the long run.

“We believe iPad Mini is positioned to do better than expectations, similar to what we have seen in the past with iPod Mini and iPad Nano, both products that were also ironically viewed as overpriced,” Sterne Agee analyst Shaw Wu wrote in a note to investors earlier today. “We view similarities where a ‘midrange’ high-quality product is priced reasonably.”

Brisk presales of the Mini would seem to back up that theory. The device sold out quickly after appearing on Apple’s online stores, just after midnight last Friday. Current orders are slated to ship in “2 weeks,” while the version with cellular networking is due in “mid November.” Apple so far has shied away from commenting on the device’s presales, something it’s trumpeted with iPhones and iPads in the past.

“In our view, this is a very strong statement from consumers, and we believe iPad Mini will eventually surpass sales of the iPad over the next two to three years,” says Brian White, an analyst with Topeka Capital Markets, who expects Apple to sell 7 million Minis by the end of its current quarter, and 30 million next year.

The Mini is the first expansion of Apple’s iPad line since the product launched in early 2010. Following years of rumors, Apple unveiled it at a private event in San Jose, Calif., last week, and it’s since gone on to get rave reviews from early reviewers. Many have complimented its small size and light weight, though they’ve been critical of its screen, which doesn’t have the same quality as what’s found on Apple’s full-size iPad, iPhone, and iPod Touch.

The device goes on sale Friday at 8 a.m. local time in 30 countries, beginning in New Zealand.