Thursday, February 2
You are at:Home»News»Sarawak»Ting denies cutting any tree in mangrove swamp
For the freshest news, join The Borneo Post's Telegram Channel and The Borneo Post on Newswav. 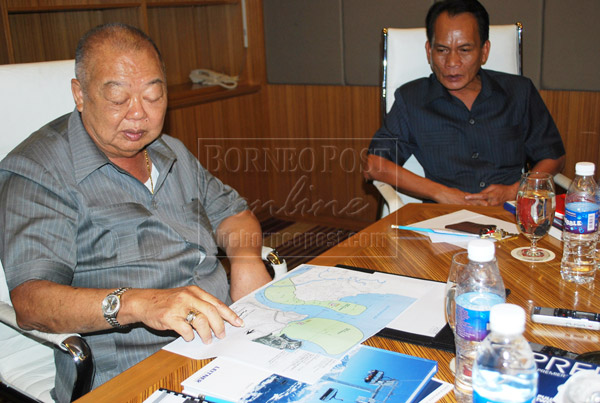 HERE IS THE PLAN: Ting (left) shows the map on the proposed Santubong Beach City and Resort Centre as Abdul Rahim Abdullah, the managing director of Budi Kenyalang Sdn Bhd looks on.

Ting, who is advisor of the company, told a press conference here that ‘they were just cleaning the bush and not clearing the land’ and ‘did not involve any tree cutting’ as claimed by certain parties.

“I dare say that not even a single root of mangrove has been cut during the cleaning process. We were just clearing the grass and rubbish at the land because (potential) investors want to see the condition of the land.

“The two-hectare state land has been cleared for investigation. We call it investigation on the land because investors want to put up RM2.5 billion. Since the bush is so thick, how are we going to use the machete to cut?” he asked.

He also said that an area on the mountain slope opposite Santubong Resort cleared by the company was private land, which he claimed to be the location of a house that belonged to the Sultan of Brunei.

He said people who made noise about the issue, including ‘very high ranking people’ were not aware of what was happening.

“If they can go and see for themselves, I don’t think they will talk like what they had said to the press. I hope that after this press conference, those who have said something untrue should take back their statements,” he said.

Ting, who is also advisor of Global Upline Sdn Bhd, pointed out that the proposed cable car project was part of a bigger development plan in Santubong called Santubong Beach City and Resort Centre.

The cable car project would be run by One Cable Car (Santubong) Development Sdn Bhd, which is owned by Budi Kenyalang Sdn Bhd and Evergreen Earth Sdn Bhd.

On the proposed Santubong Beach City and Resort Centre, Ting claimed that some investors from China and Europe had expressed their interest in the project, which would take five to 10 years to complete.

The centre would have hotel, commercial centre, residential area, park as well as fisherman wharf apart from the cable car.

The project would help to transform Santubong into a trully tourist attraction, said Ting.

“Tourists arrivals to Sarawak are limited. Most of hotels are running at low occupancy. There were days when hotels
in Santubong had no customer at all. It is very difficult to keep the hotel and tourism industry alive if we do not have new things.

“I believe the Santubong Beach City and Resort Centre will be able to change the situation just like the Langkawi Island.”

Ting said that a similar plan in Langkawi Island had successfully transformed the island into a big tourist attraction.

The proposal of the development plan had been put forward to the state government but he refused to disclose the latest progress.

He assured that the mega project would not harm the natural environment in Santubong but declined to say whether an Environmental Impact Assessment (EIA) report on the project had been submitted to the relevant authorities.

“We do it every day,” he said referring to the EIA report.