Friday, October 29
You are at:Home»BPOnline»Move to promote BIMP-EAGA connectivity 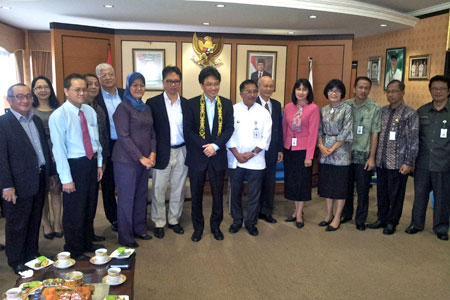 BALIKPAPAN,East Kalimantan: Industrial Development Minister Datuk Raymond Tan Shu Kiah and Mayor of Balikpapan Rizal Effendi discussed and explored a number of areas on which closer business and industrial actions could be forged between East Kalimantan (Kaltim) and Sabah during a call on the latter here yesterday.

During the discussions, Tan found many areas of development in Kaltim that are similar with what is happening in Sabah, namely the development of port facilities and activities related to oil and gas (O&G) industry.

“One of the top priorities of BIMP-EAGA is to improve connectivity and I see from our discussion here today, there are specific areas whereby this improvement could be made,” said Tan, who is representing Sabah at this regional economic grouping at its ministerial level.

In view of the prevailing weak global economic conditions, Tan said this is all the more reason why Kaltim and Sabah and other areas within BIMP-EAGA should work closely together and find common solutions to face these serious economic challenges.

“We are so close to each other. It is imperative that we integrate and consolidate our production and marketing strategies. I am here to explore such possibilities,” he told Rizal.

Both Tan and Rizal agreed, for instance, that airlines operating in this Borneo region should seriously consider re-establishing direct air links between the cities of Kota Kinabalu and Balikpapan, the second largest city in Kaltim.

Tan, who is here on a two-day visit with a number of officials, said his ministry would take this mater up and make a formal appeal to the airlines concerned for their attention.

“We shall show the potentials of air travel volume for such a direct air link once it is in place, not only for tourism but for education, specialist medical care that is now available in the capital of Sabah and other purposes,” he stressed.

Meanwhile, Rizal supported the idea of direct air connectivity between the two Borneo cities and agreed to provide the necessary inputs from Balikpapan’s point of view on the matter.

Later, the Sabah delegation toured the Balikpapan Port Authority where they were given an opportunity to study how operations at the port and the shipment of products were being managed.

The Sabah visitors were briefed at the port by Alex Hironimus, the ship service manager, who disclosed that like Kota Kinabalu, Balikpapan has developed a new container terminal, about 27km away from the Balikpapan City centre.

It is known as the Kariangau Container Terminal that occupies an area of 72.5 hectares, with a capacity of 250,000 twenty-foot equivalent units (TEUs).

Among several Malaysian pavilions he visited were that of Tekno Logam Sdn Bhd, a manufacturer of gaskets and seals and a supplier of fluid sealing products for industries, in particular O&G and power generation.

On hand to accompany him on the tour of Malaysian booths was Nadzri Shamsudin, Trade Commission of Jarkarta-based Malaysian External Trade Development Corporation (Matrade), the agency that facilitated Malaysian participation at the IGEX.

Speaking to a reporter of a local TV station, Tan stressed that his mission here is to promote closer trade and industrial links and cooperation within the Borneo provinces and states, like Kaltim and Sabah, in the context of BIMP-EAGA.

“It is my hope that industrialists here in East Kalimantan and Balikpapan will take a serious look at investment prospects in Sabah, that is not far away from here,” he told the journalist.

“There are many avenues open for industrial joint ventures and collaboration between Sabah and Kaltim especially in the O&G industry,” he added.