One of the drawbacks of being city born and bred all your life is that it is quite easy to literally miss the trees for the forest. 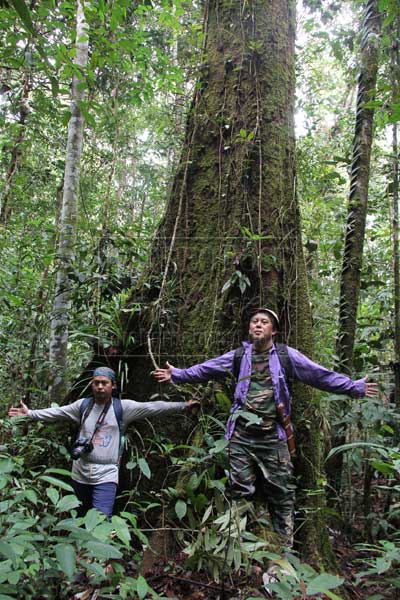 I quickly learnt very early on during the recent Mentawai Scientific Expedition (MSE) there was often much more going in the forests of Gunung Mulu National Park (MNP) than what my untrained and unskilled senses could pick out.

Fortunately, I had the advantage to be in the knowledgeable company of the MSE researchers who were very generous with their expertise.

The result was not only a front-row seat to the unparalleled natural wonders of what MNP, a Unesco World Heritage site, has to offer but also a sobering reminder of what could be lost should Sarawak fail to treasure and protect the natural environment.

“Do you know what this is?” asked Yahud Wat, a Forest Department of Sarawak (FDS) forest ranger, placing his hand on the gnarled buttress of a large tree.

“You should know it well.”

I squinted up at the towering giant, futilely wracking my brain for a decent response as Yahud awaited my reply while smiling ear to ear. The tree’s top was so tall I could not even make out the shape of its leaves.

Engkabang? I hazarded a guess.

Yahud’s smile broke into an even wider grin as he gleefully surrendered the answer: “It’s a durian tree. Maybe a hundred years old or more.”

He pointed to some round, marble-sized objects scattered on the ground under the tree.

Upon closer look, I saw they were tiny, miniature sized durians, blown off the tree by strong winds before they had a chance to mature into the size and shape most of us recognise durians to be. I had walked right on top of them without even noticing what they were!

The diameter of the durian tree was so big that even when joining hands end to end, Yahud and fellow team member Yazid Kalbi could not circle their arms around the base of its trunk.

This was the first time I had encountered such a large durian tree, much less one probably at least twice as old as this country I was born in.

“You won’t find many durian trees growing this old or this big,” said Yahud, patting the tree’s massive trunk affectionately.

“This one can only do so because it is in a protected area.”

Much to be discovered

The hundred-year-old durian tree is a living example of how Sarawak’s natural forest, are vital living archives of Borneo’s biodiversity.

When asked for their opinions why scientific expeditions in Sarawak generally seemed to yield a high number of unique specimens and species, some MSE researchers pointed to conducive environmental factors in soil, rainfall, geology and climate which produce a confluence of ideal conditions for biodiversity to thrive.

Unimas researcher Dr Sepiah Muid had just one succinct observation to share: “It’s because There’s no one out there looking for them.”

The fact of the matter is that there is still so much of Sarawak’s biodiversity yet to be discovered and documented.

Many MSE researchers I spoke with acknowledged and cautioned that despite the gains and discoveries made over the years, Sarawak has only just begun to scratch the surface of the true value of her natural environments.

At the same time, Nature is under mounting pressure from mankind’s of-times destructive activities. Scientific and conservation communities are racing against time, pitting their will and wits against lack of personnel and resources to ensure that Sarawak’s natural treasures will be retained, researched and preserved for future generations.

Nature can be very resilient, yet surprisingly fragile, when subject to drastic changes – man-made or otherwise. Some species of plants and animals are very sensitive to even slight changes in the environment.

Freshwater-crabs and macro-invertebrates researcher Jongkar Grinang from Unimas pointed out that certain animal and insect species, including water insects and aquatic snails, were especially sensitive to changes in water quality.