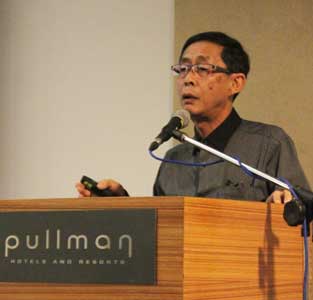 KUCHING: Researchers conducted experiments to show that Vitamin E from palm oil can save brain cells in the event of a stroke.

In a recently concluded study, Prof Yuen Kah Hay of Universiti Sains Malaysia (USM) and his team of researchers found that 200mg of palm tocotrienols taken twice daily is the key to improving chances of recovery.

“The evidence we have suggests that if people take it as a neuroprotective supplement, it can prevent brain cells from dying in the event of a stroke, and stimulate the reconstruction of blood vessels after,” said Yuen.

He was speaking to an audience of 115 comprising doctors, nurses and other medical professionals at a hotel here on Saturday evening.

Stroke is the number three killer in Malaysia after heart disease and cancer. This discovery can make a difference to millions affected by stroke.

Yuen and his team began clinical trials after an American study showed that palm tocotrienols could protect brain cells at a nanomolar level.

The researchers in America published their results after experimenting on genetically modified mice prone to the same kind of stroke and on canines. They found that palm tocotrienols could minimise neuronal cell damage.

In the study led by Yuen, 200 human volunteers with white matter lesions (WML) or oxygen-starved brain cells were recruited to undergo the trial for two years.

The placebo-controlled randomised, double-blind clinical trial was carried on for two years after commencing in January 2008.

At the end of the first year, researchers found that those taking 200mg of palm tocotrienols orally twice a day showed small increases in the WML volume. Those in the placebo group showed a seven fold increase.

The placebo group continued to show increases through the second year, but those on palm tocotrienols showed a decrease.

These encouraging results drove the Performance Management and Delivery Unit (Pemandu) to fund a similar trial on diabetic patients. The study will involve 300 volunteers and take up to three years.

“With the promising evidence in this human clinical trial and with the abundance of palm oil in our country, it is likely that palm tocotrienols will become a national treasure to Malaysians,” Professor Yuen added.

Recently, researchers at Ohio State University showed in a clinical trial that 200 mg of palm tocotrienols twice a day can reach vital organs including the brain.

This is due to the Subrabio (TM) delivery system which is able to increase absorption of tocotrienols by up to 300 per cent. The system has been awarded a US patent and is unique to Hovid.

Previous ArticlePolice personnel must be cautious when dealing with criminals, says IGP
Next Article 10 per cent additional stock allowed