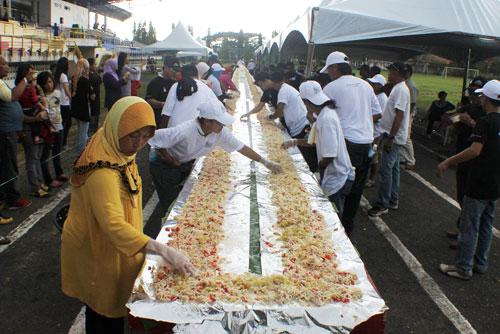 CREATING A RECORD: The locals making the record-holding dish at the carnival.

It measured 170.3 metres to enter the Malaysia Book of Records.

The Melanau dish was the brainchild of Permata Recreation Club.

The club and Dalat District Office organised the carnival while Entertainment Empire Sdn Bhd was the programme co-ordinator.

“Mukah youths still stick to their traditional food even though they are exposed to the modern world. We, however, do not expect ‘umai’ to be widely accepted by all levels,” said organising person Rusmad Norhady Muhamad.

An officer of the Malaysia Book of Record, Zulhairi Md Zain, officially recognised the record.

A certificate for the dish was also presented at the event.

A total of 160kg of fresh fish was used to make the dish.

“We, as the organisers, thank the Dalat District officer Yussibnosh Balo for his support of the carnival. We also appreciate the stadium’s supervisors and the Dalat community who gave moral support in making the event a success,” Rusmad said.

The recognition certificate is on the way to be handed over to the state government.