Saturday, July 31
You are at:Home»Sports»Crystal, a gem in table tennis 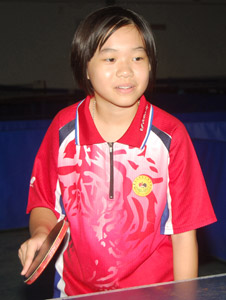 A STAR IN THE MAKING: Crystal in action at the recent championship.

Never mind Crystal did not manage to lift the title but it was crystal clear that her ability to beat her more senior opponents to enter the final was indeed an eye-opener.

For her splendid performance, she had earned a ticket to the forthcoming 49th National Table Tennis championship, slated to be held in Negri Sembilan, starting Dec 17.

Young and vibrant, the 12-year-old pupil of SJK (C) Tung Hua also won the accolade to become the youngest table tennis player here to represent the state in the National Open Championship.

“This is going to be a big challenge and hopefully, I can play to the best of my ability, and honestly, I will be looking for a winning breakthrough to perhaps inspire me to work harder in the game,” she told The Borneo Post in an exclusive interview.

Crystal was not setting herself any target in the National Open Championship, saying her participation was more towards gaining exposure and experience.She is down to compete in the singles, doubles and team events and it remains to be seen if Crystal could indeed saw off her highly rated opponents at the championship.

Her coach, Kong Tuong Sing, described Crystal as a rare gem who possessed the unique characteristics

“She is fast and has the speed and the agility. She also has that strong mental strength,” he said, adding, “She learns very fast and it was her mental strength that should be her greatest asset.”

Crystal was actually a slow starter as she only picked up the sport when she was seven-years-old.

Nobody encouraged her to go into table tennis but somehow, she admitted her thirst for the game broadened the moment she picked up the game.

Last year, she took part in the MSSM table tennis championship held in Labuan and returned with a respectable third placing.

“Past records meant nothing if I let complacency set in. I can only hope to improve myself and possibly, build a name for myself in the table tennis fraternity.”

To polish and improve her skills, Crystal has been doing training with her coach at the table tennis hall in Merdeka Road.

Training together with her is her younger sister, Esther, and about some 10 young potential players which Sibu Ping Pong Association (SPPA) has been nurturing thus far. SPPA chairman Dr Clement Chen described Crystal as a future star to watch.

“She can be a pride to SPPA and over time, she should be able to develop her skills and be a potent threat to her challengers.”