Wednesday, September 23
You are at:Home»News»Sabah»Aussie pens beautiful memories of Sabah into book 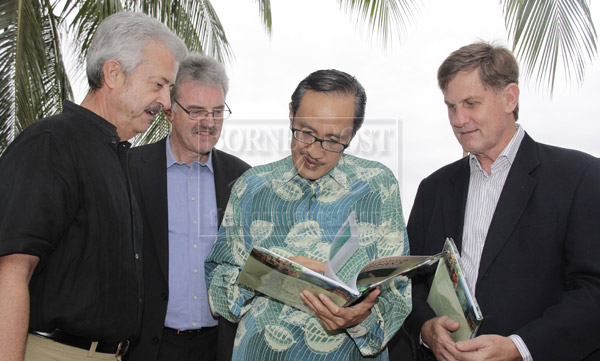 Masidi (second right) browsing through the Enchanting Borneo as Bowden (right) and others look on.

KOTA KINABALU: For over two decades, Australian David Bowden has a collection of beautiful memories of Sabah. So much so that he decided to pen them into an 80-page book.

The freelance photojournalist, who specialises in travel, food, wine and environment topics, remembered the little things that caught his eyes when he first visited Borneo Island some 20 years ago.

“It was very exhilarating to be on the world¡¯s third largest island. I stayed in a small hotel near the Filipino Market and was immediately immersed in the thrill of a new destination.

“From my window I saw women with colourful clothing and fishermen lugging in the catch. I discovered new smells, including durian, heard a riot sound and was madly touching all these new and exotic products. I was sensory overload,” recalled Bowden, who later disclosed that the state capital was his first port of call.

The author first visited Borneo as a consultant to the World Wide Fund for Nature (WWF) and has returned numerous times to write and photograph it for many regional publications.

But of course, those were just among the many things he shared during the launch of his book entitled Enchanting Borneo, one of his many Enchanting series, by Tourism, Culture and Environment Minister Datuk Masidi Manjun here yesterday.

Bowden also told the guests of his walks through the water villages that once lined the city’s foreshore, and was immediately made to feel welcome by the children who followed his around.

“On later visits, my colleagues were amazed that I walked through here as they thought it was unsafe. To the contrary, I almost became a regular as I walked and photographed through here many times,” he said, adding that some of the photographs have been used to illustrate his book.

On all the journeys, he was amazed at the abundance of tourism products that Sabah has, which he described was already there.

“Unlike many places around the world, nothing has to be built or designed as nature has done all the handiwork. Borneo is still one of the world’s best tourism secrets that has not been overrun with mass tourism. All that is required is wise management and guidance and I think this is well and truly in place in Sabah,” he said.

The Enchanting Borneo was also made possible with the collaboration of Sutera Harbour, and it is a special edition for Sutera Harbour Resort, as it highlights the well-talked of integrated resort.

Masidi, in his speech, congratulated Bowden for his effort, adding that although it was a simple occasion, in tourism, it creates a new chapter to promote Sabah.

“People may ask, why book? It is the first starting point of interest on our place. It brings truth to the saying that the first impression creates a lasting impression. I know that he (Bowden) loves Sabah, and that is why he wrote the book,” said Masidi.

He said unlike Borneo, many may not have heard of Sabah, a small state that has a lot to offer.

“And to have someone to write about this small state would definitely trigger the people’s interest to know and discover Sabah more ­ that is the power of books,” he said.

Many, he added, have been said about Sabahans in the book, and Masidi said it was up to the people in the state to live up to the description given by Bowden.

On another development, he noted that there has been a tremendous increase in the number of Europeans choosing Sabah as their holiday destination.

“I am surprised with the increase over the last 10 to 11 months this year, as the number of Europeans increased by 45 per cent. Germans alone rose 71 per cent. The Chinese visitors have always been good, and in fact, by July this year, their numbers have equalled the entire Chinese visitors’ figure in 2011,” said Masidi.

He expects the number of tourists to continue to grow with the re-launching of several flights from international destinations such as Perth, Australia; Guangzhou and Shanghai, China; and Tokyo, Japan.

“It is not easy to lure domestic tourists as most of the airlines are offering cheaper fares to travel abroad. In fact, it is cheaper from the Kuala Lumpur-Kota Kinabalu fares ­ either that, or the KL-KK seats are taken up by foreign visitors,” he said.

Having said that, he said it was a challenge to the tourism industry in Sabah, adding “Challenges are good as it would challenge one to do better. So let us all be challenged and come up with better ways to lure more people to come to Sabah.”