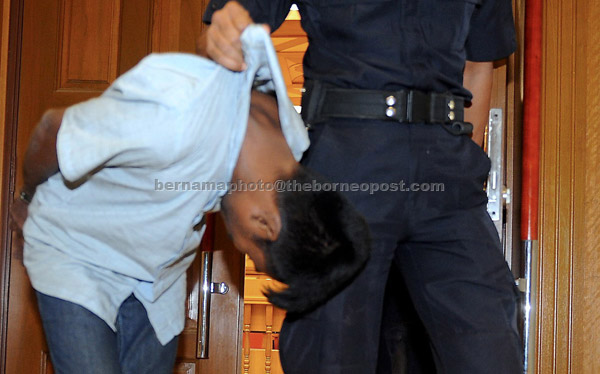 CAMERA-SHY: Mohd Sobir bows down to avoid being photograped after he was sentenced. — Bernama photo

KUANTAN: A former soldier was sentenced to three months’ jail by the Magistrate’s Court here yesterday for stealing a packet of milk, worth RM21.99, from a supermarket last Tuesday.

Senior Assistant Registrar Jesseca Damis handed down the sentence on Mohd Sobir Kashim after he pleaded guilty to the charge.

She ordered Mohd Sobir to serve the sentence from yesterday.

Mohd Sobir, 32, was charged with stealing a packet of ‘Anlene Gold’ milk at the Jaya Gading Supermarket Semambu near here at 2.15pm on Nov 13.

In her judgment, Jesseca said the offence committed by Mohd Sobir was serious although the amount involved was small.

“You are a former soldier and should not have committed an offence like this,” she added.

Earlier in mitigation, Mohd Sobir, from Padang Serai, Kedah, said he stole the packet of milk so that he could sell it to get money to buy food for his daughter.