Sunday, September 27
You are at:Home»News»Sarawak»Two cars burst into flames, one driver burnt to death 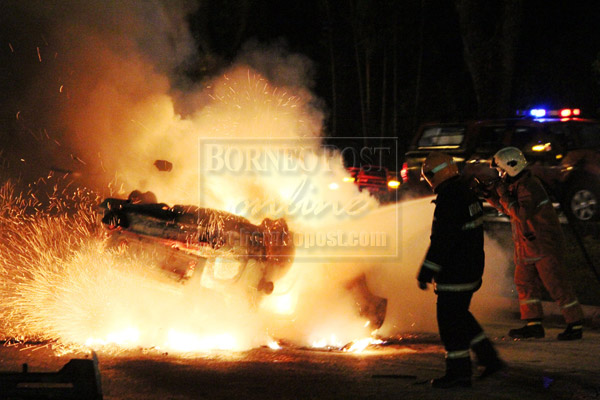 KUCHING: One person was burnt alive while another survived in two separate accidents here and in Bau yesterday during which their Proton Iswara Aerobacks burst into flames.

The fatal incident occurred around 2pm when a Proton Iswara Aeroback driven by a man yet-to-be-identified caught fire after colliding with a three-tonne lorry in Tondong, Bau. 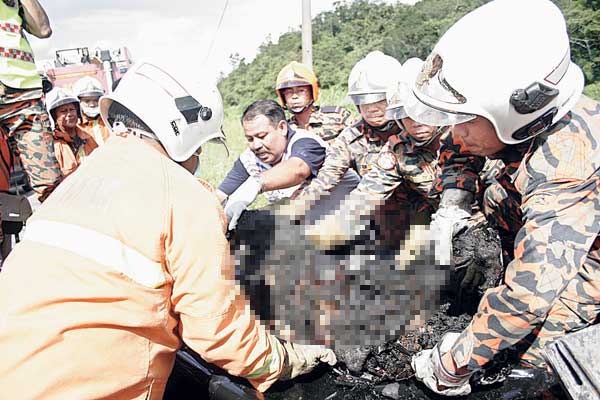 BURNT TO DEATH: The body of the deceased was taken out from the car by firemen. -Photo by See Hua Daily News

Lorry driver Kend Kandong told reporters he was transporting a load of carbonated drinks from Lundu to a factory in Batu Kitang when he saw the Iswara head towards him from the opposite direction.

“I saw the car swerve into my lane from afar and I immediately flashed my high beam, but the car remained in my lane heading towards me,” said the 46-year-old from Padawan.

He said to avoid a head-on collision, he swerved his lorry to the roadside but the Iswara still struck the side of the lorry, and caught fire before coming to a halt in the middle of the road. 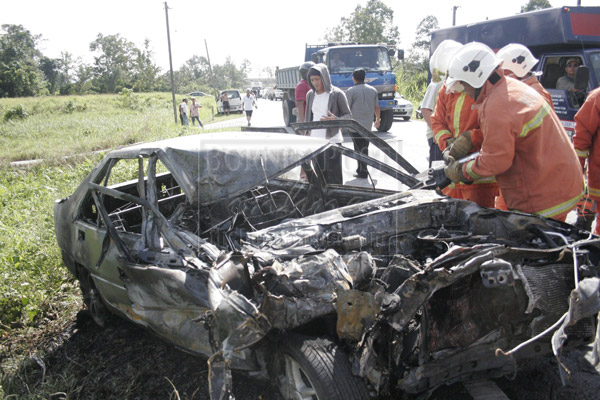 Kend said he and several other motorists rushed to the burning car but they could not help the driver out as it was engulfed in flames within less than a minute.

Personnel from Bau Fire Station arrived after being alerted only to find the vehicle and driver burnt beyond recognition.

The charred remains of the victim- later identified as Francis Linco Rinden of Kampung Opar- were later extricated and sent to Bau Hospital for a post mortem.

Bau district police chief DSP Mohd Sabri Zainol said the deceased was a Sesco technician who was travelling from Betong to Bau, where he stayed with his wife – a nurse- and one-year-old son at Bau Hospital hostel. 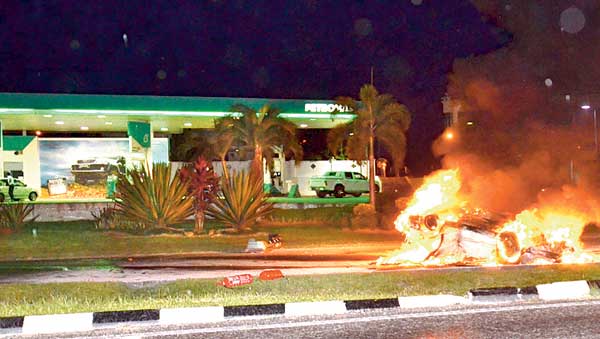 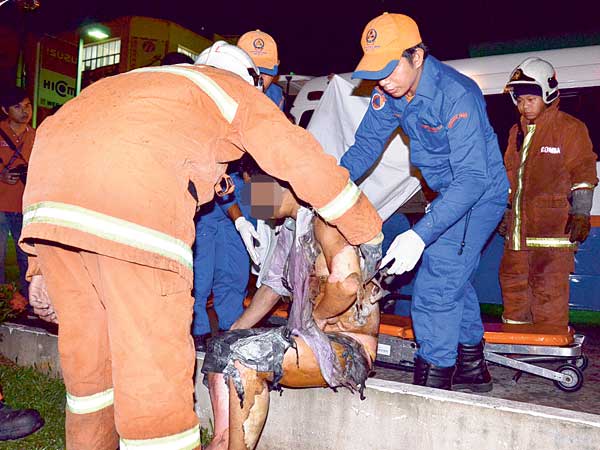 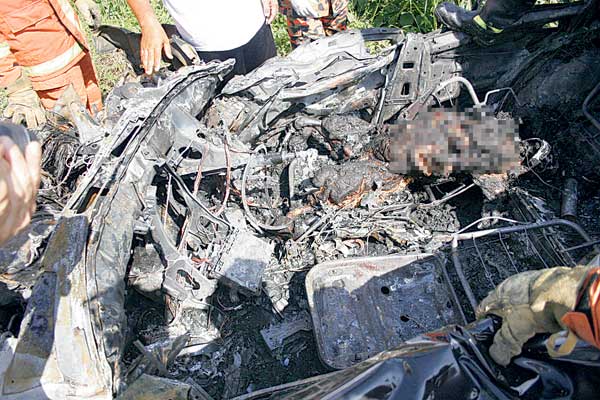 In the second incident which happened around midnight yesterday, a man was rescued from his burning car following a crash near Kota Sentosa.

The 36-year-old from Jalan Perupok in Gita was believed to be heading home when his car – also a Proton Iswara Aeroback – went out of control and overturned in front of a petrol station.

The vehicle instantly caught fire, prompting the driver – trapped inside – to scream for help as the flames spread to his clothing.

Three passers-by rushed towards the burning car and yanked him to safety moments before the entire vehicle burst into flames.

Another member of the public used an extinguisher from the petrol station to put out the fire on the victim’s clothing, as firemen arrived to douse the flaming Iswara.

The incident left the driver with burns on his legs and left torso, and he was sent to Sarawak General Hospital where he was admitted.