Monday, August 10
You are at:Home»News»Sarawak»Targeting 4 mln visitors by yearend 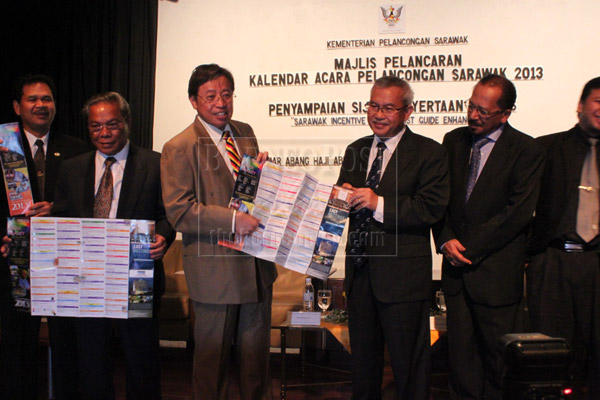 KUCHING: The Tourism Ministry is optimistic about reaching a grand total of 4 million visitor arrivals by end of the year.

“We are waiting for December for the figures for the last quarter of the year. We may hit 4 million based on current figures. The last quarter is also school holidays, which is peak season.”

He was speaking at the launch of the Tourism Event Calendar 2013 yesterday. It contains 101 events comprising cultural events, destinations or city events, festive events, sports events and conferences. This includes international level events such as Rainforest World Music Festival (RWMF).

Presently it only covers the first half of the year, so organisers can still submit their event to the Tourism Ministry for inclusion in the July-December calendar of events.

Abang Johari pointed out that an international event to look out for next year is the Asean Film Festival and Film Awards.

“We have other events we want to upgrade including the Kite Festival in Bintulu, the Sarawak Regatta and Borneo Jazz in Miri,” he said, adding the ministry was also proposing to make Sibu home to the International Folk Dance Festival.

“Next year will be very eventful as we are celebrating Sarawak’s 50 years of independence. This is the right time to position ourselves to attract more tourists to our state.”

He advised operators to be creative in coming up with packages to attract visitors to the state.

“Besides individual tourists, we have groups which will only come if the package is attractive.”

Azahari said SkTGA was looking to merge the three tourist guide licences under a diploma course to avoid the hassle of having to acquire three different licences.

“We are licensed under the Tourism Malaysia, and we have two licences – City Guide and Localised Nature Guide. When Sarawak Forestry Corporation came in, they introduced one for Park Guide which is limited to the area the guide is operating.”

Azahari said all these need to be merged into one – a Sarawak Licence.

This will allow them to hone the competency level of the guides so they don’t just show tourists the culture, but can interpret it for a richer experience.