Monday, July 4
You are at:Home»News»Sarawak»Musical theatre performance at old DUN complex on Dec 15 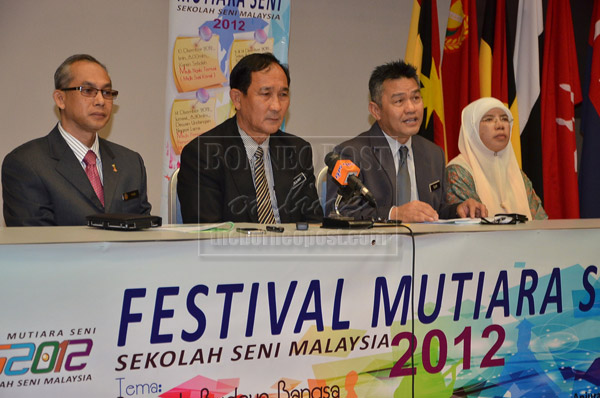 Seventy-five final year students of Sekolah Seni Malaysia Kuching will showcase their talent in this original play based on the Mount Santubong fairytale romance.

The one hour 40 minutes play will see original scores and scripts produced by students who will be graduating.

Adding cheer to the annual festival from Dec 10 to 16 is Sekolah Seni Malaysia Johor Bahru showcasing their performance at the Old DUN complex on Dec 14 in conjunction with the official opening of the festival.

A total of 74 students from the peninsula art school will depict a play based on legendary folklore such as Badang and Hang Tuah with elements of the modern era.

Sekolah Seni Malaysia Kuching will also showcase a fragment of its performance. Members of the public are encouraged to attend the showcases on both nights to support the students and the performance arts industry. Admission is free.

“Apart from showcasing student talent to the public, and giving final year students the chance to display the skills acquired in the past five years, the programme will expose the public to musical theatre performances.

“These programmes will promote theatre and musical industry, while enhancing our objective to promote and develop the national cultural element,” state Education director Abdillah Adam told a press conference to announce the Festival Mutiara Seni II programme at the Education Department’s headquarters at Bako near here.

Other programmes slated in the week-long festival included a visual arts exhibition at Kuching Waterfront from 2pm to 4pm on Dec 11 to promote both arts schools.

A band performance by both schools will also take place.

The arts visual exhibition will also open at the Old DUN building from 8.30am to 5pm on Dec 14.

The Sekolah Seni Malaysia Kuching convocation ceremony will take place at the school at 10am on Dec 15.

The festival is held in collaboration with the state Education Department and Education Ministry Arts and Co-Curriculum Section.

On another note, Abdillah revealed that Sekolah Seni Malaysia Kuching will finally have its own place with the construction of a new school in Santubong. The project is meant for implementation in 2013 but its tender has yet to be called.

“The new school, complete with modern facilities for performance arts such as theatre, dance studio, music studio and so on will have a capacity of 500 students. It will cost more than RM50 million,” he told reporters after the press conference.

At the moment, students and teachers of the arts school are sharing premises with SMK Tun Abang Haji Openg at nearby Demak. About 260 students are studying in 16 makeshift classrooms in five existing cabins. Two new cabins will be set up for the 2013 school year.