Saturday, August 13
You are at:Home»News»Sarawak»SMC chief urges residents to take up landscaping 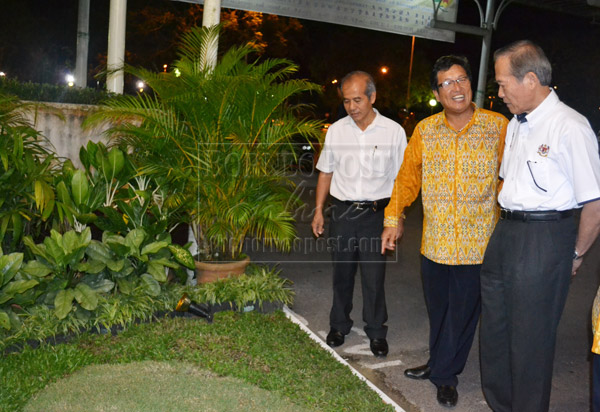 PLEASING TO THE EYES: Yiing (centre) leads Tiong on a tour of the landscaping exhibition upon his arrival for the closing ceremony. At left is Cr So Teck Kee.

SIBU: Residents here are urged to seriously consider landscaping their surroundings including homes, offices and even factories.

Lanang MP Datuk Tiong Thai King said as an encouragement, the Residential Compound Landscaping and Beautification competition would be revived to promote landscaping in residential areas.

“We require cooperation from all local communities to make Sibu town a beautiful urban dwelling,” he said when addressing at the closing of Sibu Landscape Festival 2012 held at the Town Square here Sunday evening.

Tiong, who is also the chairman of Sibu Municipal Council (SMC), said landscaping involved manipulating the natural environment in an area, and often relied heavily on gardening though it also involved the installation of walls and other features, the construction of buildings and the consideration of an area as a whole.

“There are endless benefits to using landscaping in your yard. Landscaping can make dull and solid areas pleasing to the eyes. It is responsible for making ordinary homes into spectacular ones and office buildings into warm, liveable spaces.

“Landscaping has influenced the character of our towns and cities and they provide places of widely ranging character, where people can relax, recreate and learn,” he said.

He said most often one would spend much time, money and effort to make his or her own house compounds clean and beautiful.

However, the same might not apply to road verges outside houses, he said, adding it was sad to notice at times that road verges were heavily littered with household rubbish and garden waste.

Many, he pointed out, also could not sustain their initial enthusiasm to landscape the road verges and left them to become bushes of wild vegetation.

According to him, SMC found it difficult to provide grass-cutting services in such circumstances.

“If everyone could make it a point to ensure that the road verge in front of their house is clean and tidy, I think Sibu will become a much cleaner and more beautiful place to live in,” he said further.

Meanwhile, he congratulated the organising committee, especially the Sibu Bonsai and Garden Association (SBGA), for successfully organising the landscape festival this year which attracted many local landscape enthusiasts to come and visit the exhibition and landscaping products and services.

“I would like to thank SBGA under the able leadership of Yiing Tian Chai for reviving the Landscape Day again after a break of seven years.

“I hope that Landscape Day will become an annual event from now on,” Tiong added, noting that the last Landscape Day organised by SMC was in April 2005.

On another matter, he said SMC would continue its efforts to enlarge the Lake Garden by implementing Phase 4 and 5 of the project.

Previous ArticleEntrepreneurship and leadership styles
Next Article 5,000 to converge at BCCK for Civil Service Day celebration