Tuesday, August 9
You are at:Home»News»Sabah»Sipadan has not changed – French explorer 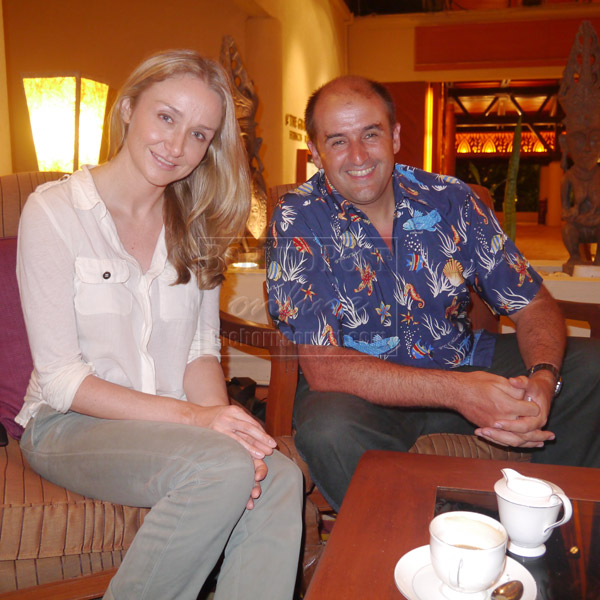 Alexandra and Simon during the interview.

KOTA KINABALU: Sipadan is still the same as it was in 1988, when world famous French underwater explorer and filmmaker Jacques-Yves Cousteau made his remark, “I have seen other places like Sipadan 45 years ago, but now no more. Now we have found an untouched piece of art.”

Making this claim recently was none other than the late explorer’s own granddaughter, Alexandra Cousteau, who is now attached with the National Geographic as an explorer.

“We watched his film with the crew and it was really interesting. We were comparing how it was in 1988 to how it was now. The abundance looked to be the same and we dove on the same spots. He has written so much about it in his books – in so many other parts of the world, things have changed,” said Alexandra, who was in Sabah to explore and make a short documentary for the National Geography on the beauty of islands in Malaysia with the Scuba Zoo.

“This was in 1988 which was 25 years ago. It is still the same (now) as it was then, the abundance is still as it was then. And we have lost so many since then. It is indeed the most beautiful places I have been. It is 10 out of 10. It is really a revelation. In Sipadan I have never seen so many healthy corals, so many turtles, so many fishes,” she said.

Alexandra mentioned that she first learned how to dive under the guidance of her late grandfather in a diving spot at the southern of France when she was seven years old.

“So much is gone. The Caribbean is almost gone. You have a real treasure. I hope to come back one day with my daughter so that she can dive here like my grandfather did,” she said.

“So many things in Sipadan are extinct like in other parts of the world – it is a real treasure,” she said.

She then mentioned of the conservation effort that were being undertaken in Sipadan — the turtle sanctuary and the shark sanctuary.

“One hundred million sharks are fished and finned every year so it makes sense to have the sanctuary. It may be (one day) the last place in the world that has sharks. A live shark is not only important to the environment but also to the communities around.”

Meanwhile, Scuba Zoo founder and chief executive officer Simon Christopher explained the importance of maintaining the ecological balance in the sea and mentioned why sharks had to be conserved.

“Without sharks, the weak and old will not be predated. There would be massive overgrazing and soon, there will be a desert,” he said.

And having predators in the sea is also a crowd puller and makes perfect sense in the context of touristic attraction.

“If you have no more predators, no one will come,” he said, simply.

He emphasised that a framework needs to be put in place to protect sharks species in Sabah and that various issues related to awareness and controlled fisheries need to be addressed.