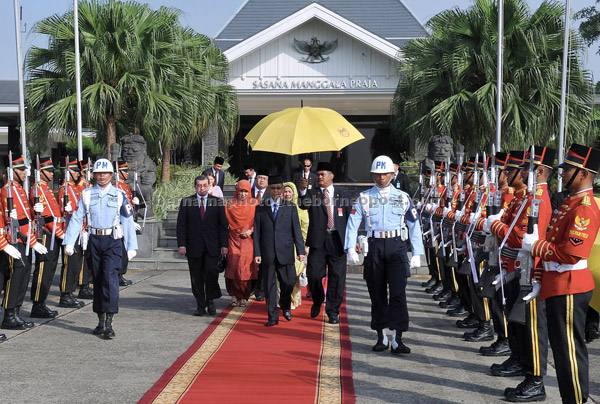 Their Majesties flew off in a special aircraft from the Halim Perdanakusuma Airport, accompanied by Malaysian Agriculture and Agro-based Industry Minister Datuk Seri Noh Omar as the minister-in-attendance.

Indonesian Social Minister Dr Salim Segaf Al Jufri and the Malaysian Ambassador to Indonesia, Datuk Syed Munshe Afdzaruddin Syed Hassan, were among those present at the airport to see off Their Majesties.

Noh said the visit helped to boost ties between Malaysia and Indonesia.

“The emphasis now is for this friendly rapport between the Malaysian and Indonesian leaders to be followed up at all levels by the people in the two countries,” he said.

President Susilo Bambang Yudhoyono of Indonesia had emphasised the need to enhance relations between the two countries, saying their peoples were from the same lineage, Noh said.

He said one way of enhancing people-to-people relations was by making students of the two countries “little ambassadors”.