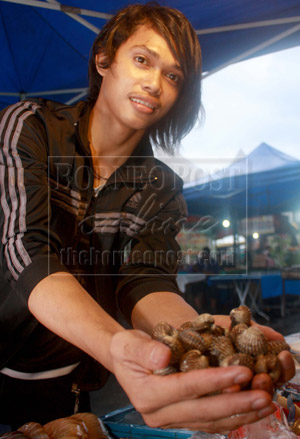 KOTA KINABALU: The Department of Fisheries yesterday advised the people across the state to refrain from consuming any type of shellfish or bivalves immediately following the detection of red tide in the west coast of Sabah.

In issuing the red tide warning, the department’s director Rayner Stuel Galid also advised the public to refrain from collecting shellfish and bivalves from the sea areas in the west coast with the intention to eat or sell them.

“If consumers do wish to eat bivalve shellfish, they are advised to make certain that these bivalves are not obtained from the waters off the west coast of Sabah,” he said.

The shellfish include oysters (tiram), mussels (kupang), cockles (kerang) and any type of clam-like food.

Rayner said the presence of Paralytic Shellfish Poisoning (PSP) toxins has been detected in samples of bivalves (kerang-kerangan) obtained from the sea in parts of the west coast of Sabah.

He said samples of bivalves taken from Kuala Penyu District, particularly the Setompok Lake area, and from waters off Kota Kinabalu District, including Gaya Island, Sepanggar Bay (Kuala Menggatal included) and Likas Bay as well as Papar, Putatan and Tuaran districts have shown to contain toxic level of PSP toxins.

The department also detected the presence of high densities of the PSP-causative organism, that is the dinoflagellate, Pyyrodinium bahamense var compressum, in samples of seawater taken from those affected areas.

Rayner said red tide occurances in Sabah in past years have revealed bivalves to be as toxic as 8000MU (Mouse Unit), where 400MU is considered the lowest limit as the dangerous level for humans.

Some of the shellfish samples taken to date have shown the levels to be as high as 4,010MU in Papar and 1270MU in Tuaran and is considered as very high.

“There is a high possibility that other adjoining districts will be affected (by the red tide) in the future. It is also expected that shellfish will become more toxic as these dinoflagellates become more numerous in the sea,” he said in a statement.

Rayner said safe to eat are all types of prawns and crabs including shovel-nosed lobsters, mantis shrimps, all types of coral fish and fish which are predatory such as sharks and sting rays, barracuda, tenggiri, jacks, etc, and deep sea fishes.

As a prudent measure, consumers are advised to throw away the guts and gills of any fish to be eaten and be washed properly.

Also, any type of dried, canned, bottled or salted fish products are safe to eat, he added.

The first PSP case in Sabah was recorded in 1976 where 202 people were reported to be suffering from PSP and seven died.

Since then, PSP occurances have been detected every few years off the west coast of Sabah.

Rayner said early symptoms of PSP include tingling of the lips and tongue which may begin within minutes of eating poisonus shellfish or may take an hour or two to develop.

Depending on the amount of toxin a person has ingested, symptoms may progress to a sensation of “pricking of pins and needles” of the skin and then loss of control of arms and legs, followed by difficulty in breathing. Some people have experienced a sense of floating or nausea.

Rayner advised the public to get medical treatment immediately at the nearest hospital or clinic if they experience the symptoms.

“There is no medication available for PSP or Saxitoxin poisoning; in general, supportive measures are the basis of treatment for PSP and in severe cases, with the use of a mechanical respirator or oxygen,” he said.

The department is working closely with the Health Department and will conduct further sampling and testing of other fishes and life sea collected from other districts to determine if they are toxic and dangerous to human health, he said adding further information can be obtain from http://fishdept.sabah.gov.my/download/redtideinfo.doc