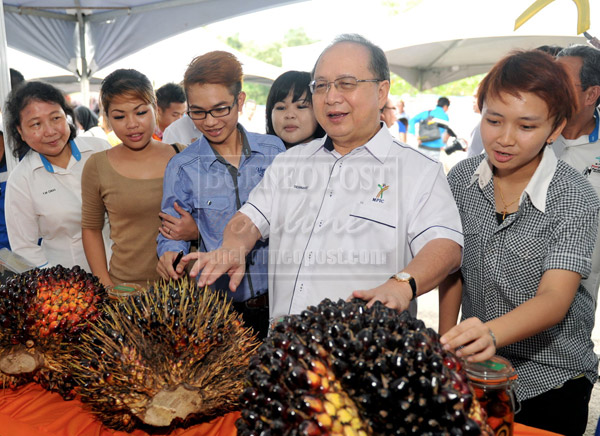 FRUITFUL: Dompok explains to the youths about the revenue received from the oil palm estate. — Bernama photo

He said the optimism was based on the consistent earnings raked in by the sector which was one of the main pillars of the economy.

“The government is currently encouraging relevant parties to implement the B10 biofuel programme (blending of 10 per cent palm oil biodiesel with petroleum diesel) and this will use about one million tonnes of crude palm oil each year,” he told reporters after officiating at a career carnival here yesterday.

Dompok also said the government has agreed to the use of crude palm oil as feedstock to generate electricity especially in Sabah.

“Sabah is poised for rapid economic development as the large hectarage of land under oil palm cultivation is expected to assume a vital role in contributing at least 30 per cent of the state’s earnings,” he said.

Dompok was confident the plantation and commodities sector would continue to flourish and provide ample job opportunities and called on employers to give priority to local graduates to be employed in managerial positions within the sector.

While saying that they should be employed with the right salaries, he said there were more job opportunities for locals than foreigners.

The minister said there were jobs for 5,549 people in the plantation and estate sector, as at end-September.

He said there were also no vacancies for skilled labour to fill various positions from mandore to harvesters.

As of end-September, foreign labour made up 76 per cent of the workforce in oil palm plantations, nationwide. — Bernama