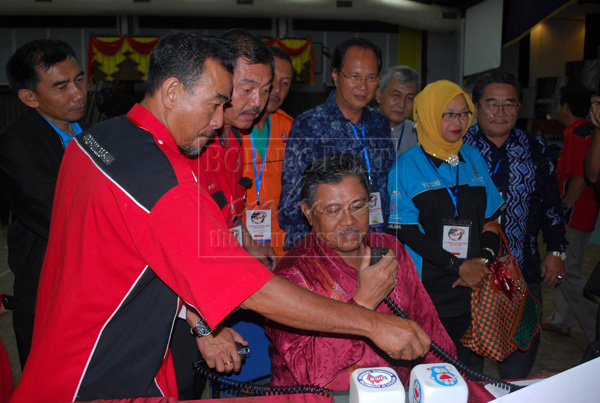 OLD WAY COMMUNICATION: Morshidi (seated) tries to communicate through the radio as Liew (third left) and others look on.

KOTA SAMARAHAN: With the introduction of advanced technological gadgets such as smart phone, it has become a challenge for Amateur Radio Club Sarawak to continue attracting young blood to join the club.

Admitting that amateur radio was a ‘dying hobby’ nowadays, its advisor Alan Ming Addie said on Friday that sustainability was the biggest issue faced by the club, which was established 18 years ago. The club has about 200 members.

“It is indeed an uphill battle for us to get more young people to join the club. Many young people have joined the club, but they become inactive after leaving school. We feel there is a need to revive the hobby,” he said when met prior to the opening of the 7th Borneo Amateur Radio Festival at the old campus of Universiti Malaysia Sarawak (Unimas) here.

He pointed out that they had been working closely with schools through activities such as Jota (Jamboree On The Air) for Scouts as well as participating in engineering related workshops in universities by setting up roadshows to introduce amateur radio as a hobby to youngsters.

Apart from technical knowledge relating to operating the amateur radio, club members will learn the Morse Code, a system of sending messages in which the alphabet is represented by signals, he added.

In his opening speech, the club president Liew Chung Haw said the objective of the festival was to provide a platform for amateur radio operators, particularly in Borneo, who usually communicated through radio, to meet face to face.

“The main aim, however, is to have integration among fellow amateur
radio operators within Borneo primarily and the region to cater for communications in times of emergencies and natural disasters should they happen.”

The festival, which ends today, attracted a total of 150 participants from Sarawak, Sabah, Indonesia, Brunei as well as from the peninsula.