Monday, August 3
You are at:Home»News»Sarawak»Local fruit festivals can be tourist attraction — Dawos 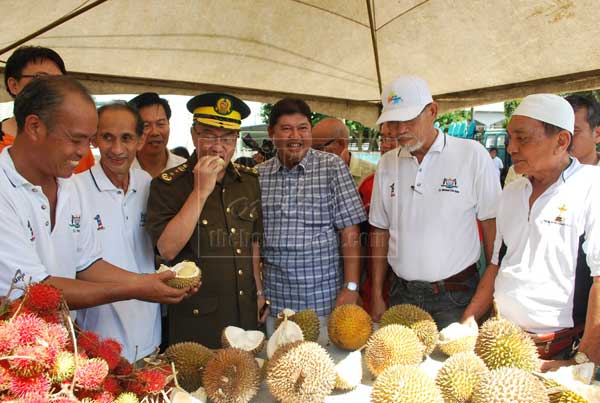 YUMMY: Dawos (third left) enjoys the durian at the fest.

KUCHING: Local fruit festivals should be held more frequently in Sarawak as they have the potential to be a tourist attraction, said Deputy Tourism Minister Datuk Dr James Dawos Mamit yesterday.

He reasoned that tourists would be drawn to the state to participate in the festivals as tropical fruits, particularly durian, were getting popular in many countries such as China, Japan, Korea, Taiwan and the European continent.

“The ‘Pesta Buah-buahan’ (fruits festival) @ Kota Padawan’ is being held for the first time here.

“Actually, such festival is very common in the peninsula. I see the need to have a similar festival in Sarawak

“I want to promote local fruits to tourists so that they would come during the fruit season.

“For instance, the festival held today (yesterday) will benefit not only the Mambong parliamentary constituency but the whole of Kuching,” he told reporters when met at the event held at the parking lot of Kota Padawan near here. 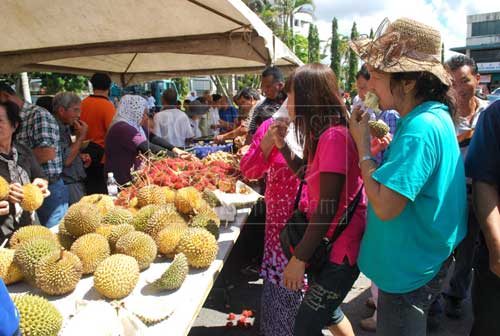 EAT ALL YOU CAN: Local folks help themselves to the local fruits.

He added that such festivals would allow foreign tourists to have a real taste of Malaysian fruits since most of the tropical fruits sold in some foreign countries were mainly imported from Thailand.

Taking durian as an example, Dawos said Malaysian durians had different and unique tastes compared to those from Thailand’s which were sweet.

It attracted hundreds of local folks.

About 500 kg of local fruits such as durian, rambutan, mangosteen and langsat were snapped up within an hour.

Previous Article‘DAP demand a cause for feud’
Next Article Be tolerant of each other, communities told