Saturday, August 15
You are at:Home»News»Sarawak»Wake-up call for travel agents

KUCHING: Travel agents in the state have been taken to task for not being serious in promoting the state’s tourism products to the world. 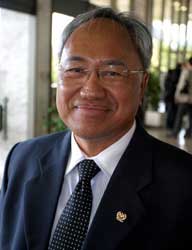 Expressing his disappointment Deputy Tourism Minister Datuk Dr James Dawos Mamit observed that not many travel agents in the state participated in international conferences, for instance, to promote the state.

Dawos, who is also Mambong MP said, “In November last year, no travel agent from Sarawak took part in a conference in Australia to promote Sarawak.

“The same happened when I went to India early this year. A coordinator asked me about going to Sarawak, but where are the travel agents from Sarawak?” he lamented during a press conference after launching the state-level ‘Karnival Perlancongan
Tarian Cuti-Cuti 1Malaysia 2012’ at the Hockey Stadium here yesterday.

Dawos stated that due to the lack of seriousness in promoting the state, most foreign tourists flocked to the peninsula and Sabah instead.

“If no travel agents (from Sarawak) follow delegations, there is nothing much we can do because I cannot sign an agreement with them. All I can do is to only recommend them to visit Sarawak.”

Dawos said there was no problem between the state and federal tourism ministries. In fact, both parties were working closely together to promote the state.

He added that in the first 10 months of this year, a total of 3.2 million tourists visited the state, and out of this 2.1 million were from Singapore, Indonesia and Brunei.

“Most of the Indonesians came here for health treatment, so that is under health tourism.”

On the possibility of attracting foreign tourists from Arab countries, he said the state would need to develop tourism products that could be an attraction to them, such as theme parks, adding that places such as the Islamic Information Centre and museums here could also attract their attention.

Dawos said besides Kuala Lumpur, the Arabs, being the biggest spenders, with an average of RM7,000 per capita, preferred places such as Melaka, Penang, Johor and Langkawi.

Overall, average spending by foreign tourists is RM2,350 per capita.

He added that people from Pakistan and Bangladesh also preferred Malaysia because they considered the country as an Islamic country.

As for the ‘Malaysia My Second Home programme’, those keen were from China, India, Bangladesh and the United Kingdom.

Dawos said he was currently doing a dossier to get Sarawak included into the Global Geopark Network as it would enable the state to be called `Kuching Delta Geopark’.

“The dossier is currently being designed by the Geoscience Department. When we had an international convention here last year, we discussed about Kuching Delta Geopark because we have highlands at Jalan Puncak Borneo, Bau and Santubong with different kinds of stones/minerals and iconic caves.”

Dawos said if recognised as Kuching Delta Geopark, the state would be able to attract tourists like in Langkawi, whereby the geopark there, which is recognised by the United Nations Educational, Scientific and Cultural Organisation (Unesco), had attracted many tourists.