Friday, August 7
You are at:Home»News»Sarawak»MASwings clears air about its airfares 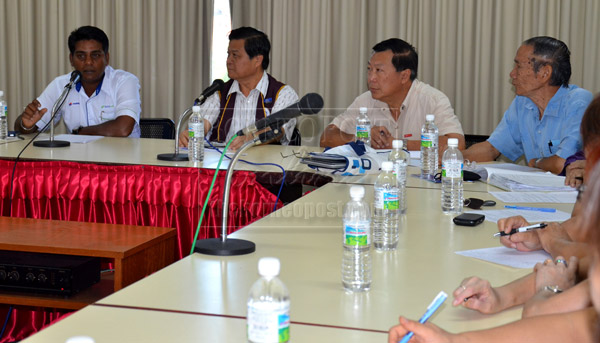 CLEARING THE AIR: Zamanimaran (left) explaining the operations of MASwings to the federation president Hii Teck Yun (centre) and others during the dialogue yesterday.

MIRI: Airfares charged by MASwings are controlled by the government, and thus this subsidiary of Malaysia Airlines cannot change airfares at its whims and fancies.

MASwings Miri’s sales and marketing manager Zamanimaran Abdullah told members of the Federation of Miri Division Chinese Associations Sarawak during a dialogue session here yesterday that MASwings had been entrusted to serve the rural areas of Sarawak and Sabah but the operating cost, especially those involving Twin Otter planes, was high.

“This high operation cost has caused the hike in price of air fares,” he said.

“As for sectors which you feel the airfares are too high, you just let us know the sectors and we will forward your request to the Ministry of Transport for their consideration.”

On the federation’s request for MASwings to introduce return flights between Marudi and Mulu, he said it was not possible as the aircraft used around that area was the ATR72 models, which Marudi Airport could not accommodate.

“If we want to ply this sector, we need to have two different aircraft.”

Touching on flights between Miri and Mulu, Zamanimaran said currently there were two flights daily and the sector was served by ATR72 planes.

The passenger loads were relatively high during the peak season, such as January and December. School holidays are also a peak season.

During non-peak season, he said passenger load could nosedive to a mere 55 per cent.

On a related matter, Zamanimaran advised the federation to write in to MASwings should they have any problems. This initiative, he explained, was vital as it would enable MASwing to bring the matter to the attention of the Ministry of Transport.

“MASwings will always try its best to solve all problems faced by the people effectively.”

During the dialogue, the federation had also requested the opening of a direct route between Miri and Penang.