Wednesday, May 12
You are at:Home»News»Sarawak»Cops suspect siblings may have committed incest 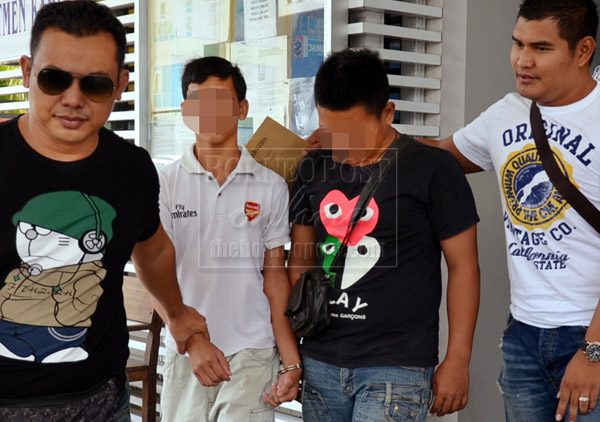 ARRESTED: The two teenage brothers are now helping the police in an alleged incest case.

SIBU: The police here are anxious to determine whether two teenage boys and their sister had committed incest after the 13-year-old girl gave birth to a boy.

They are now taking the 15-year-old and 17-year-old brothers for medical examination and DNA tests.

The incident came to light after the children’s father found the girl pregnant in July.

He lodged a police report after she refused to reveal who fathered her baby.

When the police took the girl in, she tried to cover up, saying she had an intimate relationship with her boyfriend.

She gave birth in September, and the result of a DNA test showed that her boyfriend was not the biological father of her son.

The police took the girl in again, and this time, she broke down and confessed she had an intimate relationship with her two brothers.

The girl said their mother was working in Bintulu and that their father always left town for odd jobs, leaving the three of them and their youngest brother at home.

The police arrested the two brothers yesterday morning and sent them to the hospital for medical examination and DNA tests.

The girl’s family has given the infant boy away for adoption.

She and her mother were staying with her aunt in Sungei Merah.

They intended to go home on Sunday but Nurul was found missing on Saturday night.

After waiting in vain for Nurul to return, Siti lodged a police report.

In an unrelated case, a businessman’s BMW car parked in an underground parking lot of a shopping mall here was splashed with acid.

The 37-year-old man had left his car there on Monday night.

A security guard called him near midnight after he saw smoke from the car.

Besides being splashed with acid, the businessman said he found a parcel in the car.

The police have taken it back for analysis.

The businessman said he had not offended anyone recently, and he knew not the motive of the crime.