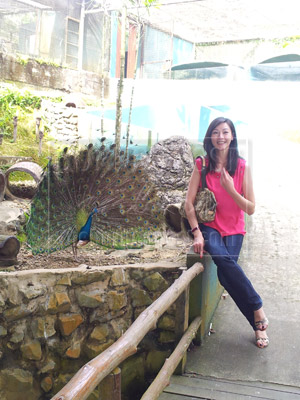 BEAUTIFUL: Sharon Luk poses for a photograph with a peacock displaying its feathers during a visit to Jong’s Crocodile Farm.

KUCHING: Sarawak’s sunny climate, cultural diversity, scenic beauty and magnificent outdoors have made it a great destination for international events as well as business and leisure travel.

The state is highly diverse, especially in culture and multicultural activities that could cater for every tourism niche; from business, eco and cultural tourism through to adventure, medical and rural-tourism.

She strongly believes that Sarawak has a strong worldwide appeal as a leisure destination.

“Sarawak has so much to offer to the world especially in tourism from its colourful culture, rich heritage and exceptional tasty food to beautiful nature.

“It offers tourists such dynamic experience that cannot be found in other parts of Malaysia or the world,” said the first runner-up of Miss HK 2005, adding that this trip was an eye-opening experience for her.

Since retiring from the entertainment industry about four years ago, Luk has ventured into business and joined 4Home Group International Co Ltd as vice president of sales with Goh as its president.

Especially impressed with Sarawak, which to her truly reflects multiculturalism, Luk who is a member of Wai Yin Association which is the official association for past pageants, intended to propose to the association to use Kuching as its venue for an outdoor shooting event for Miss HK Pageant 2013.

“I will go back and propose to Wai Yin that Kuching be a potential venue for the Miss HK Pageant outpost shooting,” she said on Wednesday during a visit to Jong’s Crocodile Farm.

Established in 1982, the charitable organisation serves as a model of hope for the community of Hong Kong through fulfilling its social responsibility by carrying out various activities.

“I will also approach TVB (Television Broadcasts Limited), which organises the Miss HK Pageant and is the leading Hong Kong television station, for this proposal,” she added.

Luk was however bewildered that a majority of Hong Kong people do not know where Kuching or Sarawak is.

“They know Kuala Lumpur and Kota Kinabalu but not Sarawak. But this place is like a paradise hidden amidst a sea of skyscrapers,” she said.

Therefore, Luk said, the first step would be to create awareness of this place among Hong Kong people through Miss HK Pageant.

“Miss HK Pageant is an ideal platform in which hopefully we can get HK celebrities to be involved. This would in turn promote Sarawak to not only Hong Kong but the world and lure visitors here,” she added.

“It is interesting to get a real and close angle about Kuching through this tour. Surely, I will also share my exceptional experience with my friends when returning to Hong Kong so that they could know Kuching and Sarawak,” she assured.

Luk highlighted that Hong Kong people will definitely enjoy a leisure holiday in Kuching because “we like the beach and nature instead of spending money on retail”.

However, she pointed out that the state lacks proper public transport system and direct flight, the two main concerns of travellers, which could hamper efforts to draw in tourists.

“Convenience and simplicity are the most important aspects of travelling. There is an urgent need to enhance public transport system in the state as well as providing direct flight to Kuching,” she emphasised.

Also, she plans to promote Sarawak as a wedding destination where couples can fly in to hold their wedding and reception with close families and friends for a memorable and exquisite experience.

Luk was a flight attendant with Korean Air and Virgin Group before she entered the Miss HK pageant in 2005.

After winning the first runner-up title, she went on to sign a contract with TVB and started her career in the entertainment industry.

She hosted E-Buzz as well as many charity shows and had starred in several television series including Survival’s Law II and Forensic Heroes II.