HOW much do we really know about the elusive Malaysian pangolin (Manis javanica)? The name pangolin was first coined in 1734 from the Malay word pengguling, which means rolling up into a ball. 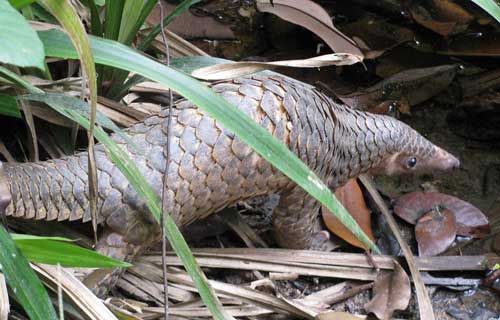 PRIMEVAL SPECIES: The first fossil pangolin was dated to early Pleistocene (Ice Ages) times of about one million years ago.

This mammal is a primeval species of anteater that has outlived its larger and now truly fossilised planet dwellers. The first fossil pangolin, found in a cave in India, has been dated to early Pleistocene (Ice Ages) times of about one million years ago.

How much longer will humans trap these docile and unobtrusive animals and, through illegal wildlife trafficking, trade them in black markets?

There are eight varieties of pangolin in the world. The African black bellied pangolin and the Chinese pangolin are arboreal creatures seldom leaving tree branches whilst the giant African pangolin is totally terrestrial in its movements along the forest floor.

Few writers on pangolins have ever witnessed them in rainforests or in plantations for essentially they are nocturnal arboreal dwellers. I first saw a pangolin and its two babies ensnared in a wire cage hidden behind a roadside vegetable stall along the Kudat-Kinabalu road in Sabah in 1999.

The poor creature was curled up in a ball, in total misery as youngsters prodded it with bamboo sticks – a horrific experience for me to observe but even worse for the imprisoned pangolin mother. 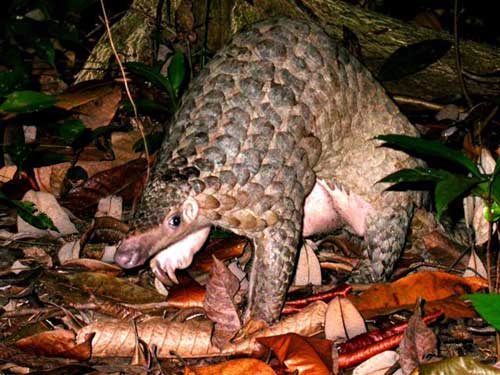 AT RISK: As its underparts are devoid of scaly armour, the pangolin is vulnerable to attack by clouded leopards, tigers and human poachers.

Robert WC Shelford in his book, based upon his observations as curator of the Sarawak Museum, ‘A Naturalist in Borneo’ (1916), gives a rare personal account of the behaviour of this extraordinary mammal.

With very strong and sharp claws, when descending from trees to the ground, the pangolin can dig a hole at tremendous speed and quickly disappear from view. This anteater is the only mammal with overlapping scales rather than hair on its body. The scales, in fact, are composed of consolidated hairs so compressed to create a body armour of keratin – the same material as a rhino’s horn.

The thick powerful claws allow the pangolin to dig deep into the soil to root out ant nests and shred termite mounds to pieces. Its short snout, with an amazing sense of smell combined with its long saliva sticky tongue, readily seeks out ants and swallows them whole.

Its thickly lidded eyes provide protection from ant bites and it is estimated that a pangolin can devour 20,000 ants each day. Its body length is up to 65 centimetres and weighing in at about 10kg, the pangolin is truly the pocket battleship of the rainforest.

Whilst its underparts are devoid of the scaly armour it carries on its head, back and tail, the pangolin is vulnerable to attack by clouded leopards, tigers and human poachers who, like the pangolin, are nocturnal hunters.

By day, the pangolin sleeps in burrows or tree holes or amongst the foliage of epiphytes such as the bird’s nest fern. Its prehensile tail – up to 56 centimetres in length – and its sharp claws enable a slow but sure climb up tree trunks.

Little is known about this quiet, almost invisible, forest dweller. Its small eyes have never been researched to determine the actual strength of its eyesight but for sure it does possess good night vision.

An artful trickster, the pangolin can deceive a procession of ants along forest floors by pretending to be dead. It will lie across an ant trail in a motionless stance thus attracting the marauding ants to what they perceive to be a veritable feast.

Our pangolin has quietly and slightly opened its scales exposing its flesh. The ants creep in and with a vice-like closure the pangolin shuts its scales down entrapping the ants and then trundles off to the nearest waterhole, ditch or stream. There it arches its back while it dips underwater, opens its scales and the ants float off to the surface, allowing the pangolin to lick up its meal.

This mammal gives birth to one or two babies at a time in an underground nest and parents them for three to four months, carrying them around on the underside of her tail before releasing them to make their solitary ways in life.

Sadly, these unusual unique creatures are hunted for food, for their scales and their skins – all for superstitious reasons. The skins are sold on the black market for shoe manufacture; the scales are made into bracelets as charms for rheumatic fever sufferers.

Today the pangolin is classified as a threatened species of mammal and early in 2012 the International Union for the Conservation of Nature (IUCN) set up the Pangolin Specialist Group at www.pangolinsg.org.

The Malaysian or Sunda pangolin may provide a short-lived household pet to rid wooden structured houses of potential termite destruction and ant invasions but these animals are no threat to humans nor do they offer any medicinal properties. They survive in captivity for less than a year whereas in their natural habitats they have a life expectancy for about 12 years.

Human predators, in the guise of poachers and destroyers of the pangolin’s natural habitat, are the greatest threat to these docile and unobtrusive mammals that are at rest with themselves, if undisturbed, in the forests and plantations.

A wildlife columnist in the UK’s ‘The Times’ newspaper recently concluded his article on these animals in a few but very pertinent words, “Pangolins are dying of human silliness!” With more research we may get to know them better and appreciate their coexistence with ourselves.

Previous ArticleBursa Malaysia likely to be firmer next week
Next Article Malaysia: Year in review 2012