Friday, August 7
You are at:Home»Features»Durians galore at Batu Niah

IT WAS slightly over two months ago that durians were selling for high prices when the tropical king of fruits first appeared in the market from October to early November. 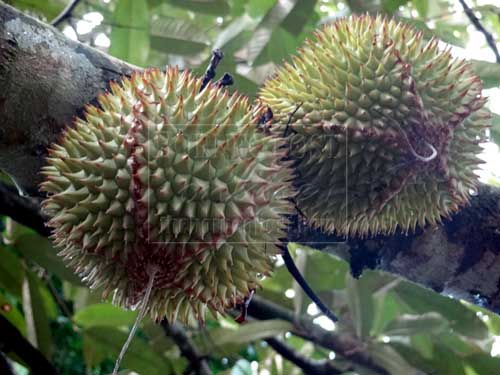 KING OF FRUITS: A pair of durians on the stem of a tree.

Normally, a bountiful harvest is a windfall to farmers and cultivators but this year, you can find durians selling everywhere at almost give-away prices — as low as 50 sen each in some places!

This is especially true in areas close to the source of durians such as Batu Niah and Marudi where planters lamented the low prices fetched in local markets — so the ‘royal fruits’ had to be sold further away in bigger towns and cities.

On one such occasion, thesundaypost was invited to join a trip to a durian orchard at Batu Niah, about an hour’s drive from Miri city.

The orchard owner decided it was no longer worthwhile selling the thorny and strong smelling fruits due to prevailing low prices, preferring to give them away to friends and relatives.

The oversupply of the once pricey and much sought after fruits was thought to correlate with abundant harvests that coincided with the Monsoon towards end of the year. The wet season is usually credited with bringing down the fruits during the night when it rained.

The rain had to be just right — not too heavy nor too light, and by the next morning, there would be plenty of fruits for the picking right off the ground.

So on a fine Sunday morning, I set out on my first trip to explore a durian orchard in Sarawak. I had been to durian orchards before but never really explored the ground for the fruits.

It was a relaxing solo drive along the coastal road through Bakam to the orchard belonging to Lim Khim Boon who owns eight acres of the land, previously planted with some 300 durian trees and later replanted with oil palms when the commodity fetched good prices.

However, about 100 durian trees and a few other types of fruit trees were left untouched for visitors, creating a somewhat interesting plantation-cum-orchard.

Our harvesting point or base was a birdnest building constructed two years ago. It provided a convenient shelter for visitors.

“We never had to worry about theft around here. The local folks are honest people who will never steal fruits at Batu Niah,” said the owner who generously gave away durians and other fruits to visitors at the end of the visit. 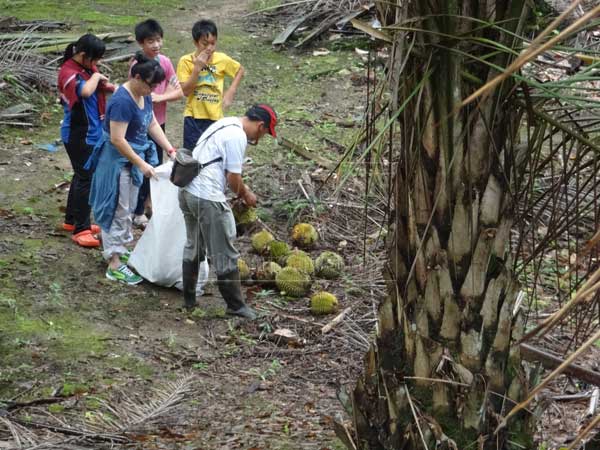 Some wood was burnt to drive away mosquitos while we started out on an adventure to explore the orchard and collect durians.

The mixed oil palm and durian orchard provides an unusual setting in an area with sloping terrain, occasionally combined with other types of fruit trees — especially rambutan, duku langsat, duku, cocoa, papaya — and crops like corn and vegetables.

There is even a pond where some of the best durians are found growing on overhanging branches. One may need a long wooden pole to fish a fallen fruit out of the water.

Durians were literally everywhere — from the ground to the water where they had fallen.

As for the danger of being hit on the head by a falling fruit, we were assured it was very rare — as if durians have eyes and they don’t like falling on people’s heads!

In fact, throughout our exploration, we did not see any durians falling. We simply picked the fruits off the ground and piled them up at a convenient spot for collection into baskets later.

However, it is not advisable to venture out at night without wearing helmets when durians are expected to fall — and it is
very painful indeed to get a direct hit!

Large rattan baskets strapped over our back were used to transport the durians back to base. Plastic bags would not do as the thorns would poke through them and pierce our back.

After a few durian-harvesting trips, we settled down to remove leaves stuck to the thorns before distributing the fruits among us. Of course, we could not resist opening up some fruits to feast on the succulent flesh on the spot.

The excitement was in discovering the types of durians, and comparing their qualities — an almost fun ritual.

“We planted only the local varieties we could find in the local market though I had also tried crossing some with indigenous species like durian ukak which produces quite unique and good tasting fruits,” said Lim who stays with his family a short drive down Sepupok Road at Batu Niah.

Apart from looking for durians, we also sought out the “best” rambutan trees near the pond where some of the best durians (yellow-flesh variety) could be found as well.

I had the chance to try some duku-langsat and duku fruits while exploring the orchard. I also spotted other fruit trees and plants such as papaya, jambu, guava, mangosteen, cocoa, corn and vegetables.

As for the king of fruits, the drastic drop in price means durian lovers can enjoy their favourite fruits at much more affordable price this year. Bon appetit!