MY FIRST impression of the Sihan people at Rumah Sihan, some 25km from Belaga Town, is that they are Ibans as the two men who greeted us on our arrival at the longhouse sported Bunga Terong tattoos on their chests. 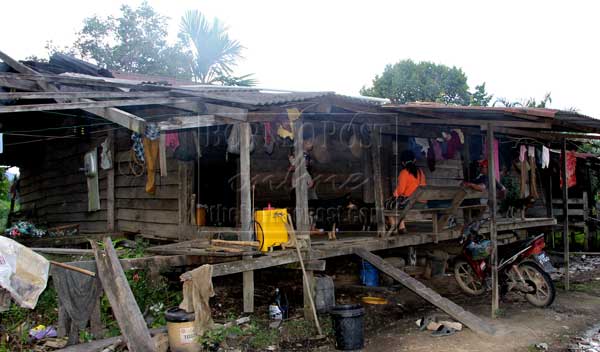 RICKETY: The present Sihan longhouse at Rumah Sihan, some 25km from Belaga Town.

Moreover, they spoke fluent Iban. In fact, the whole conversation thereafter was conducted in Iban — and a smattering of Malay.

Magui Muling, 63, the only Sihan community headman, said they had assimilated into the much bigger ethnic groups in Belaga such as the Kayans, Kenyahs, Ibans and even Penans. 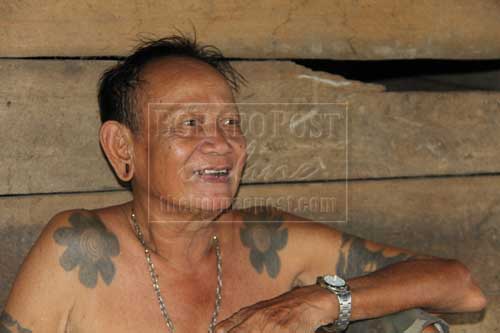 He even admitted there was nothing much he could do to stop the ‘absorption’ process and all they had now was their language and themselves.

The Sihans, now numbering fewer than 300, are fighting for their very survival, especially their identity, since their traditions and customs are long long.

The Sihans, along with the Bhukets and Sepings, are categorised as one of the few tribes in the state that are most vulnerable to extinction if their present livelihood is not preserved.

Magui revealed that his community had discarded their previous adat burung (bird tradition which is actually animism) to embrace Christianity. Most are Catholics and SIB members.

He even revealed his son, Minggu, now a headman in a Penan longhouse at the Asap Resettlement Scheme, has been assimilated into that community.

“The only legacy we have now is our language. Apart from that, we no longer have any traditions or culture because we have assimilated into the other Orang Ulu groups such as the Kayans, Kenyahs, Ibans and even the Penans in terms of traditional costumes, music and dances, handicrafts and even arts (tattoos),” Magui told thesundaypost at Rumah Sihan.

He said he had advised the younger generation to have bigger families in order to preserve their race but many prefer smaller families due to hardships and pressures in raising children.

Magui’s neighbour, Sait ak Siden, in his 40’s, and his wife, Ara Chanlai, also in her 40’s, said they could not agree more with their longhouse chief, pointing out that their very own daughter Mary Sait, 21, had just become a single mother after her husband left her and she has a one-year-old baby girl named Masahira staying with them.

“We are in a very difficult situation. All we want is to survive like the other races. But what can we do if we are already in such a predicament,” they lamented.