Meanwhile, Magui explained that the Sihans were the descendants of Ketao who used to live in the Paku and Tiau River valleys within the Mujong River system near Kapit.

“Before we left the Mujong, there was an earlier Sihan man by the name of Mekara or Matara. Because of him, we now have the name Kajang. All of us — Sekapans, Kajamans, Lahanans, Sihans and Punans — are Kajang.

“We migrated to the tableland — to the headwaters of the Murum River, the Seping River and the Belaga River. There were some of us at Lusong River. All the Kajamans and the Sekapans came from the Kajang River and down the Linau River.

He admitted the Sihans were facing a daunting task in ensuring their very own survival “because none in his community has ever passed the STPM.”

“We know education holds the key to our future. I have tried convincing parents to educate their children well but none has gone far yet. We pray that one day, a Sihan will be able to obtain tertiary education.”

Jayl Langub, a research fellow at Unimas, believed the Sihans would still be around for a long time even if left on their own.

He said although the pure Sihans would one day assimilate into much bigger ethnic groups, it would still mean the community would be around albeit of mixed blood.

“I would not like to dwell on the fact that the Sihans would become extinct in the very near future because inter-marriage is inevitable but in a way, it will ensure the survival of the community,” he opined.

Jayl along with a renowned Unimas researcher Professor Abdul Rashid Abdullah believed one of the best ways to preserve Sihan identity was to ensure their present land or settlement at Rumah Sihan, some 25km from Belaga Town, remained intact. 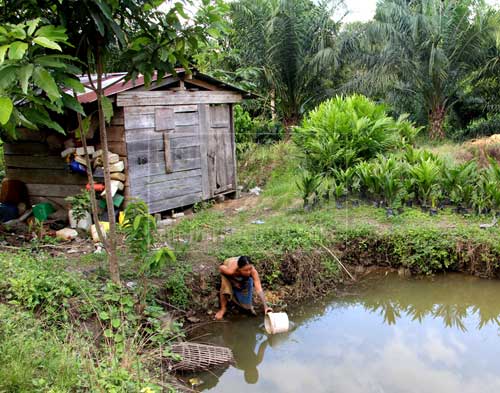 BARE NECESSITY: A Sihan woman fetching water from a pond for her palm oil seedlings.

In fact, the government has done a commendable job by constructing several longhouses, totalling 36 doors, for them at Sungai Danga, just a short distance from their present longhouse.

In his working papers on the Sihan community, Prof Abdul Rashid described the community as former hunter-gatherers who started giving up their nomadic life in the late 19th century.

“The low level of education and limited skills hinder young Sihans from migrating beyond Belaga in search of jobs. The opportunities in Belaga are very limited in relation to the number of job seekers.

“Traditional Belaga-based jobs such as haulers of goods from river barges and boats and shop assistants are fast disappearing as business dwindles and overland transportation between Belaga and Bintulu replaces the boat and barge service between Belaga and Sibu,” Prof Abdul Rashid explained.

He added that the community was relatively young with 75 per cent between one and 30 years old.

The generally young population has several implications for the future of community as the percentage of dependent population is high.

“But the advantages of the youthful population are also many for the Sihans as it means it’s dynamic and more energetic,” Prof Abdul Rashid added.

In his written work, Balui Reconnaissances: The Sihan of the Menemang River, Allen R Maxwell noted that little was known about the Sihans from published sources, particularly in comparison to the numerous materials available on other ethnic groups of Sarawak. Most of the classic works on Sarawak are silent about the Sihans.

“One finds only a few snippets of information from the 19th and early 20th century sources on the state,” he said.

He added that the Sarawak museum had maintained an on-going interest in the Sihan people and their culture.