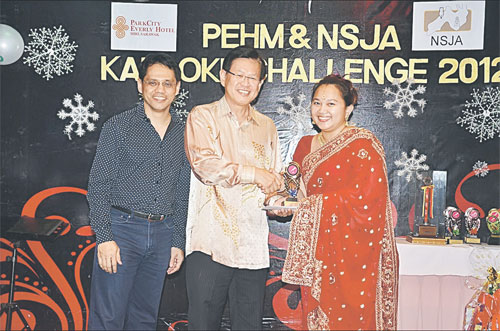 MIRI: Sarawak has again appealed to the federal government to help resolve the long-drawn problem of poor air connectivity that has hampered tourism development in the state.

“Of course KK is doing well having so many direct flights overseas. It is time the federal government helps Sarawak in air connectivity,

“All we need is to start a few international flights and Miri is a very strategic location when it comes to flights to places such as China, Japan and Korea,” said Lee at the annual karaoke competition organised by ParkCity Everly Hotel, Miri (PEHM) and the Northern Sarawak Journalists Association (NSJA) on Tuesday.

Lee, who is disappointed with the federal government and Malaysia Airlines (MAS) for failing to response accordingly to the repeated appeals by Sarawak for better air connectivity, also urged the media to highlight the urgent needs of the state.

He stressed that the existing four-weekly international flight to Singapore was not good enough even though the passenger load was good.

“I said that on a number of occasions. When I was in the Sarawak Tourism Board I always emphasised air connectivity. I put a number of proposals to MAS and even talked to the top management in MAS.”

Lee also said that it was his New Year resolution to promote tourism in Miri City, adding that he had also suggested that the Miri City Council work with non-governmental organisations (NGOs) and hoteliers to organise more international events in the city to attract international tourists.

At the same time, the mass media should also play an active role in promoting Miri and Sarawak in general.

“In fact, Sarawak, Miri in particular, are lacking in publicity on our tourist attractions, facilities, hotel accommodation, places of interest, and events.

“We need the continuous support of our journalists to write tourism stories about Sarawak and Miri City,” said Lee, who is also Assistant Minister of Sports.

On the karaoke competition, which is into its 13th year, Lee said it is a good way to promote the city and the hotel — now quite well known with occupancy rate of between 80 – 90 per cent.

He hoped this year, NSJA, hoteliers and tourism players in Miri focus on tourism promotion and make Miri City better known so get more visitors and tourists.