Sunday, September 20
You are at:Home»News»Sabah»Songs and music in the mountains 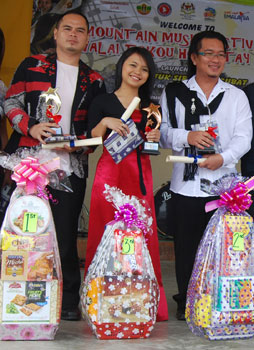 FOR THE ALBUM: (From left) Haimin, the winner, Effarina who took third spot, and Edwin, the runner-up.

SINGING and dancing is very much a tradition among the ethnic communities in Sabah.

In fact, it is very much an inseparable part of the indigenous groups under the Kadazandusun umbrella — some 38 of them arguably.

A singing and dancing competition for them is, therefore, a treat in any celebrations, including the Harvest Festival, the Coconut Festival, the recent Homestay and Music Festival and many others.

The organisers of the competition usually invite a record production company to conduct the contest and in the case of the recent Music Festival in Kundasang, Skylaser Enterprise Sdn Bhd or Skyline was the main sponsor.

The contestants showed a lot of enthusiasm as they queued up for the audition.

According to the technician and coordinator Suwarin Sabitan, many turned up to get the entry forms in early morning of Sept 15 but only a specified number could be accommodated.

“We thought it would be good enough if we had 20 so that we could pare it down to 10. Although not everyone could be accepted, I believe the overwhelming response will auger well for the entertainment industry in the state,” he said.

The finals on Sept 16 were keenly contested.

Izlan Haimin impressed the judges to win the 2012 ‘Homestay Idol’ title. He received a hamper, a trophy and a participation certificate from the recording company. 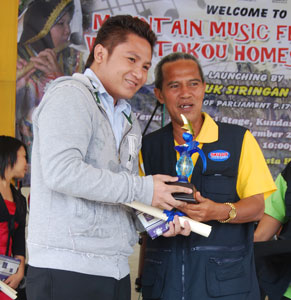 The runner-up was Edwin Ahmad who also received a trophy, a hamper and a certificate while third spot went to Effarina Jaluman.

Kerolfijo Osewan was judged the best vocalist. He represented the Misompuru Homestay of Kudat.

Skyline also highlighted its product during the competition with sales of CDs featuring songs by local singers.

The town square of Kundasang looked positively festive where artistes, including Peter Duman Gonsu and Justin Ginsos, mingled with their fans.

Meanwhile, Kerolfiji, the runner-up in the best vocalist category a the recent Misompuru Homestay OCEAN Festival in Kudat, said: “I’m very happy to represent my district this time. I feel this is a stepping stone for me to become a better singer. You can say the competition is an extension of my schooldays when I used to win inter-school singing competitions.”

Kerolfiji wants to be a lawyer and he sings only in his free time.

Another contestant Clayrona William, 23, from Kampung Pangaraban, Kudat, who is the Misompuru Homestay OCEAN Festival Malaysian Idol, said she had presented her songs as best as she could.

“I never won a competition before and when I won the Misompuru Homestay title, I was very excited. I never sang in public before — only at home or karaoke sessions.”

“I hope my singing career will develop into something more – like a recording artiste perhaps. If the opportunity comes knocking, I won’t say no. My husband is quite supportive so I have no reservations,” she added.

Clayrona may not have won the competition in Kundasang but she will remain the idol for Misompuru in Kudat.

The competition was a big success where Skyline’s bid to launch new local artists is concerned.