Wednesday, August 12
You are at:Home»News»Nation»Malaysia’s earthquake and tsunami warning system among world’s best 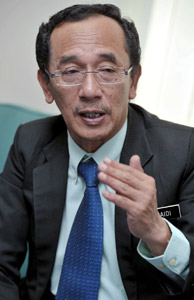 KUALA LUMPUR: Seventeen Malaysian Meteorological Department (JMM) earthquake and tsunami stations can detect the movements of the earth’s tectonic plates only a minute after they take place, making JMM among the best in the world.

He said the system, which was known as the Malaysian National Tsunami Early Warning System (SAATNM), began its operation in 2005 after the tsunami disaster in Acheh, Indonesia at the end of 2004.

“Of the 17 stations, seven are in Peninsular Malaysia and 10 in Sabah and Sarawak,” he told Bernama at the JMM headquarters here yesterday.

“When JMM issues a tsunami warning in a coastal area, some individuals may be keen to see the tsunami waves. The cameras enable us to see the waves and also alert the police on the presence of people and instruct them to leave when a warning is issued,” he said.

He clarified that the country could experience earth quakes of medium magnitudes up to 6.0 on the Richter scale because it is located near high magnitude earthquake circles such as in Sumatra and Andaman Sea.

For the record, eight local earthquakes occurred in 2012, namely, six in Sabah (Tambunan, Kota Marudu, Kudat, Beluran, Kunak and Keningau) with magnitudes of between 2.0 to 4.5 on the Richter scale while two in Sarawak (Belanga) measured 3.5 and 3.8 on the Richter scale. — Bernama