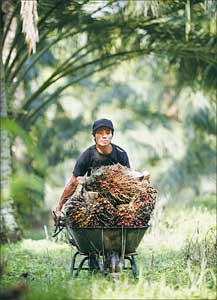 KUCHING: The recent move to raise import duty on edible crude palm oil (CPO) by India garnered mixed views from analysts, with all maintaining a neutral outlook on the Malaysian palm oil sector as they await the impending impact from this move.

OSK Research Sdn Bhd (OSK Research) in its research report on the matter believed that the import duty hike was not unex­pected given that edible oil prices have fallen so much that a 2.5 per cent import tax would hardly be felt by consumers.

“This would reduce their refin­ing margin from 7.5 per cent to five per cent (it is unclear whether the government will compensate the refiners with the duties collected). Consequently, CPO demand from Indian refiners will probably be adversely affected; and this could send bearish signal to the market (India accounts for roughly 20 per cent of CPO trade globally),” it highlighted.

“Yet, we believe the extent of the drop will still depend on the price gap between domestic soybean oil price and landed CPO import price plus refining cost. If the difference is large enough; end users should theoretically still choose to pay more for refined palm oil.”

On the other hand, analysts from RHB Research Institute Sdn Bhd (RHB Research) believed the impact from this would be highly negative if it came through.

“India is Malaysia’s second largest CPO importer, having im­ported 2.63 million tonnes of CPO in 2012, after China’s 3.5 million tonnes. Should this happen, de­mand could be stifled from India, as India is generally a price-sensi­tive market,” it pointed out.

“This could cause stock levels in Malaysia to remain at high levels, resulting in continued weak CPO prices, exacerbated by China’s new Food Safety regulations, which have also affected its CPO imports.

“China’s CPO imports from Malaysia fell 30.2 per cent month-on-month in December and are likely to remain weak in the first few months of 2013, as importers work out the new ruling’s implica­tions and repercussions.”

On a regional scale, OSK Re­search believed that Indonesia would be the country that would feel the crunch from this move.

“The hike in edible oil import duty will likely have a stronger impact on Indonesia palm oil producers than Malaysian pro­ducers due to the former’s lion share in India’s palm oil import,” it outlined. “In 2012, India bought 7.7 million tonnes of palm oil, of which 6.1 million tonnes were CPO and the rest were palm olein.

“Of the 7.7 million tonnes, only 2.6 million tonnes came from Ma­laysia. However, the narrower dif­ference between refined and crude edible oil import duties should have a mitigating effect.

On a positive note, RHB Re­search predicted that Indonesia would not change its CPO export tax structure or follow Malaysia by cutting tariffs on crude grades to zero, according to Indonesia’s Trade Minister Gita Wirjawan.

“This makes the margin dif­ferential between Malaysian and Indonesia refiners at 5.5 per cent in Jan, in favour of Malaysian refiners.”

Going forward, both RHB Research and OSK Research sus­tained a neutral outlook on the palm oil sector, with the former preferring the integrated and more diversified players, given the relatively smaller impact of CPO price movements and the impending export tax structure change on earnings.

HwangDBS Research made no change to its ratings and target prices of counters in its coverage for the moment.