Tuesday, January 28
You are at:Home»Features»Resort lines up array of touristy treats

THERE are many seaside areas worth visiting in Sabah — and indeed, many places offering comfortable accommodation and a good view of the sea. 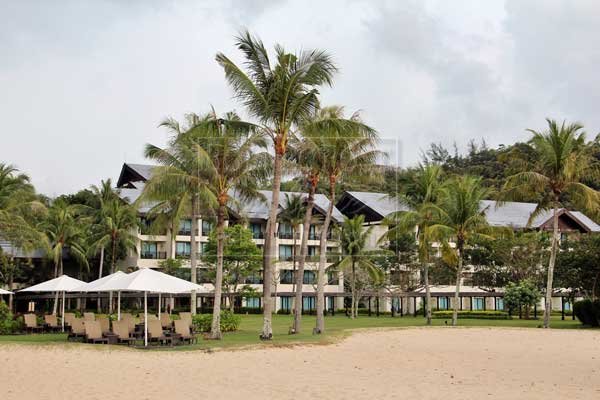 SERENE: The resort seen from the beach.

As with all five-star set-ups, the Resort promises the best in terms of facilities with sea, sun, sand and more to boot.

Rasa Ria has 416 guest rooms and suites. The Garden Wing offers a private lane to all ground-level rooms, making the Resort accessible through the Garden while the other floors have balconies.

For best of comforts, the Ocean Wing offers 90 premier rooms with a private outdoor bathtub and sweeping views of the sea and lush gardens.

According to the general manager Randy Zupanski, the 326 rooms at the Garden Wing has undergone a US$20 million refurbishment.

The lobby also had a major refurbishment and now features new decorations and furniture, making it more comfortable and spacious for guests to relax.

Other refurbishments include ethnic style artworks with modern facilities such as wall-mounted widescreen TVs linked to international satellite channels, and complimentary Wi-Fi and broadband connectivity.

The fitness centre has also been improved with a bigger exercise area where health buffs can enjoy the view of the hotel’s garden landscape while working out.

New lounge deck chairs and daybeds have been placed near the swimming pool and the beach fronting the sea. The pool has also been ‘fun-added’ with a “double-s” slide. 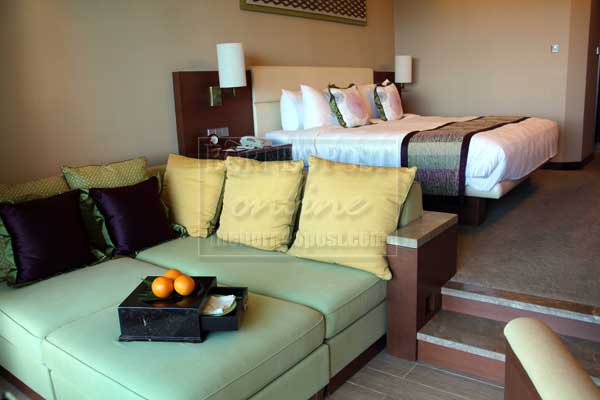 NEAT: A room at the Garden Wing

A walk round the premises reveals several other areas that have received a touch-up, mostly with water and fire features.

There is a foundation in the garden at the porte cochère, and even the lobby staircase has a waterfall cascading down a wall.

The Rasa Ria, it seems, is not stopping there but is now carrying out more construction at the porte cochère.

“The Ocean Wing will be augmented to accommodate more guests in the premier rooms,” Randy said, adding that when the construction is completed next year, 81 more rooms will be added to the Resort.

He pointed out that the gardens would not be affected as the new construction had been planned properly.

The 400 acres of gardens and the rooms overlooking a vista of white sands and surf will stay as they always have — as places to relax and enjoy fine cuisines and beverages at the seven restaurants and bars.

There will even be a new restaurant by 2014 to be launched together with the new premier accommodation.

Situated amid the lush tropical vegetation and crystal clear seas of Pantai Dalit, Tuaran, Shangri-La’s Rasa Ria Resort is about 40 minutes from Kota Kinabalu International Airport and 35 minutes’ drive from the city’s shopping and commercial district.

The Resort has been complimented by many visitors through tripadvisor for its top class ambience.

With the refurbishment of more existing facilities and the upcoming Ocean Wing premier accommodation, more such postive feedback can be expected.