TIME is running out for 84-year-old war hero Awang Raweng to be accorded recognition for valour by the Malaysian government. But still, it’s better late than never. 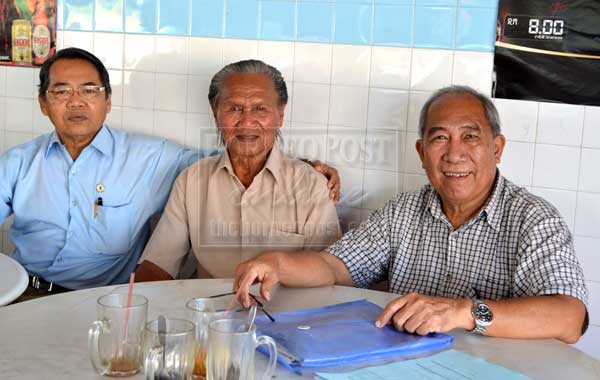 No doubt, Awang, a former Iban tracker with the Sarawak Rangers, was given a gallantry award — the George Cross — by British Commonwealth for saving the life of a fellow soldier during a seek-and-destroy operation against insurgents in Kluang, Johor, on May 27 1951.

Because of his status, he was accorded the privilege to dine with the British monarch, members of the Royal family and British national leaders – (supposedly) once every two years.

He has also been receiving a monthly pension of about £100 (RM680) from the British government since 1963.

The Malaysian government only started giving him a monthly allowance of RM2,000 quite recently. For some, this is a sign of better things to come for the veteran jungle scout.

Awang is a farmer and longhouse chieftain at Rumah Awang in Ulu Skrang. Humble and unassuming, he never asked for more after returning home from fighting the communist terrorists in then Malaya.

He has also helped his community by donating a piece of his ancestral land for the construction of SK Nanga Skrang in 1961.

Johari added that if Awang were to be given a datukship eventually by the Malaysian government, it would be a bonus for him but, more importantly, it also befits his status as a war hero.

He revealed Awang had told him that he (Awang) liked to have a house in Sri Aman.

“It’s not too late to give him the recognition he deserves. Let him have the opportunity to at least appreciate the honour during his remaining years. Don’t wait until he is no longer with us,” Johari pointed out.

He said SRVA was now working closely with Senior Minister and Minister of Social Development Tan Sri William Mawan Ikom on this.

“Awang Raweng also became a member of the Sarawak Progressive Democratic Party (SPDP) out of respect for Tan Sri (Mawan, the SPDP president).”

Johari believed the state government or the relevant authority should apply to the Johor state government “to do something for Awang” as the heroics of the veteran tracker happened in Johor.

“It should be a government-to-government matter. As an association, SRVA can only recommend. I feel as a veteran myself, it is a source of great pride to have seen one among us appointed as Temenggong and conferred a datukship (referring to Kanang).

“My appeal to the government is that due recognition be also given to Awang Raweng for his gallantry in defending the sovereignty of the then Malaya.”

Johari believed Awang should have been accorded the same privileges as the late Kanang who was an icon in Malaysia and who was also given a state funeral on his passing.

“Kanang was a Temenggong and a datuk while Awang is just a tuai rumah (longhouse chieftain). Protocolwise, Kanang sat next to the Yang di Pertuan Agong. But what is there for Awang?

“If a precedent has been created, can we not do something for Awang Anak Raweng? He is a humble man and willing to help people by almost sacrificing his own life in battle. There is a void left by Kanang upon his demise. Let Awang fill it – that’s SRVA’s appeal,” Johari said.

He pointed out that Awang’s heroics could not be measured by ringgit and sen as they were carried out to safeguard national security and for the love of country.

According to Wikipedia, Awang was awarded the George Cross for gallantry as recorded in the London Gazette on Nov 20, 1951.

He was attached to 10 Platoon ‘D’ Company, First Battalion Worcestershire Regiment in Malaya when their jungle patrol was attacked by 50 communist terrorists in Kluang, Johor, of then Malaya.

Two platoon members — the leading scout and the section commander — were killed while Awang was wounded in the left thigh.

Despite his injury, he pulled Private Griff Hughes to cover and then returned fire, repulsing attempts by the terrorists to advance, despite getting hit again – this time in the right arm — in the firefight that ensued.

Against overwhelming odds, Awang stood by his injured platoon mate and continued fighting until reinforcement arrived.

His citation concluded: “So resolute was his demeanour that the bandits, who had maintained their attacks for some 40 minutes, and who were now threatened by the other sections, withdrew.

“The coolness, fortitude and offensive spirit displayed by Awang anak Rawang were of the highest order. Despite being twice severely wounded, he showed the utmost courage and resolution to continue the fight and protect the injured soldier.”

Last year, Mawan acknowledged that the exemplary warrior, who helped defend the Malayan Union against the communists in the 1950’s, had been neglected of sorts.

“We don’t want to be accused of being uncaring, so my ministry will try to look into how best we can help improve his livelihood, especially when many others seemed to have enjoyed better treatment than he.

“We want to show that the government really cares about gallantry award recipients because if we are not caring enough, the young people will not be inspired in defending the country,” the minister said.

He pointed out that it was rather unfortunate the former Iban tracker had not been given recognition like the holders of PGB.

“I was told he was seldom invited to federal and state historical ceremonies except Commonwealth events. So for him to only receive the gallantry award from Great Britain and not the federal and state governments is something we are going to look into.”

One of the ways the government could help the forgotten war hero, Mawan explained, was to build a proper road to his longhouse in Nanga Skrang, Sri Aman, apart from upgrading his wooden house, built near his longhouse by the government through the Defence Ministry in 2006.

The minister said he would discuss with the State Secretary whether George Cross recipients could be included in the state’s invitation list.

Out of courtesy and respect, Awang should also be invited as a guest during state ceremonies, such as Independence Day and National Day because now, only PGB recipients are usually invited, noted Mawan, who is also Sarawak Dayak National Union (SDNU) president.

Awang was lucky because 21 other Iban trackers did not return alive from their tours of duty in then Malaya.

Buried for many years at various cemeteries in peninsular Malaysia, their remains were exhumed in 2011 and returned to Sarawak as part of Ops Mai Pulai (Operation Home Coming).

They were reburied at a cemetery at the World War II Heroes Memorial in Kuching.