Tuesday, May 24
You are at:Home»News»Sarawak»Community leaders all for `commando’ Dr Tiki 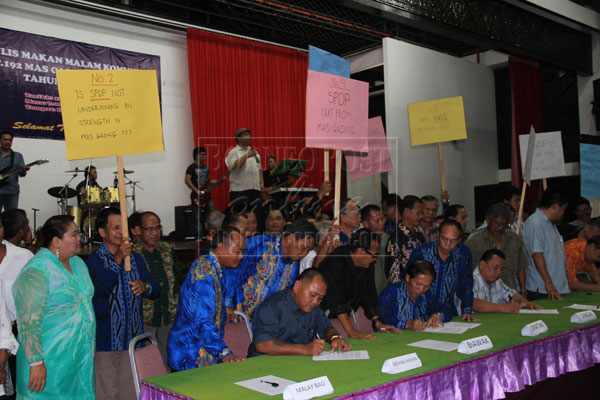 PUTTING PEN TO PAPER: Mas Gading community leaders sign a petition as a show of support for Dr Tiki during a New Year gathering at Dewan Suarah Bau.

BAU: Several community leaders in Mas Gading voiced out strongly on Saturday that they are all for their partyless MP Datuk Dr Tiki Lafe.

During a New Year gathering at the Dewan Suarah here, these leaders from the Jagoi, Singai, Chinese, and Malay communities urged the electorate to stand behind Dr Tiki, who was sacked from SPDP about a year ago for gross insubordination.

Penghulu Ricky Lee Sheng Hin said the people should reject SPDP as the party had rejected their elected representative.

“We must stand by our leader, our ‘commando’. Dr Tiki is our leader and there is no doubt that he should remain our leader,” he boomed.

As a former SPDP Tasik Biru treasurer, Lee said he was “disgusted” with the goings-on in SPDP and that Dr Tiki was right to have left.

“We have always shown our support for the party but what the party did come to show that they have no respect for the people here,” said Gani.

Penghulu Jihem Minaw said he was glad that the turnout was good as it showed that the electorate in this parliamentary constituency was united.

Penghulu Jidokson Raway, who also spoke, argued that Dr Tiki should be allowed to defend Mas Gading in the fast-approaching general election as he had a good and proven track record.

“By supporting Dr Tiki, we, however, have no intention to destabilise BN as this area have always shown strong support for BN and shall always remain a strong BN area,” said Raway.

Pengulu Morshidi Ahim too urged the people to choose their leader wisely, and commented that Dr Tiki “is indeed the right person to be re-elected as he cares for the people”.

All the community leaders signed a petition and carried banners showing their support for Dr Tiki after the last speech was delivered. It was learnt that the petition would be submitted to the top BN leadership.