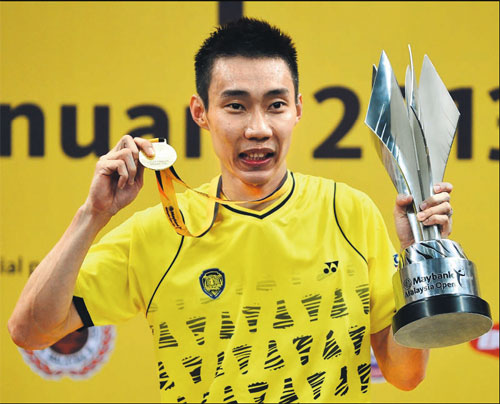 HE’S THE ONE: Datuk Lee Chong Wei celebrates with his trophy and his gold medal during the awards ceremony after defeating Indonesia’s Sony Dwi Kuncoro in the men’s single final in Kuala Lumpur yesterday. — AFP photo

KUALA LUMPUR: World number one men’s singles shuttler Datuk Lee Chong Wei has carved his name as the most successful player in the country after he clinched his ninth Malaysian Open title in style at the Putra Stadium in Bukit Jalil, here, yesterday.

In the final match, the 30-year-old shuttler who is the top seed and defending champion, easily disposed of a challenge from eighth seed, Sony Dwi Kuncoro of Indonesia with a 21-7 and 21-8 win in just 32 minutes.