Tuesday, November 29
You are at:Home»Business»Gold price could hit US$1,800 per ounce this year 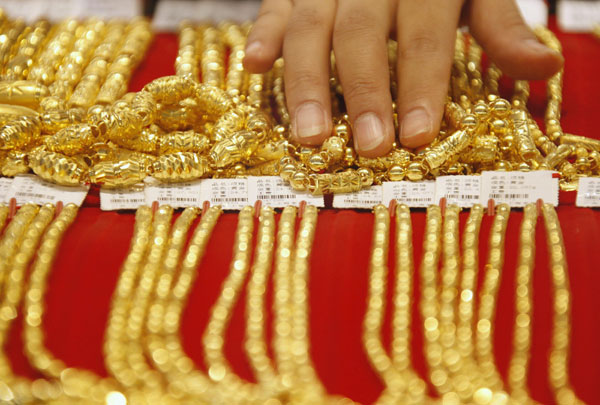 HIGH DEMAND EXPECTED: Speculation that the Indian government may increased import duty on gold to six per cent this year is expected to boost demand for the commodity. — Reuters photo

KUALA LUMPUR: Speculation that the Indian government may increased import duty on gold to six per cent this year is expected to boost demand for the commodity.

Federation of Goldsmiths and Jewelers Associations of Malaysia deputy president Ermin DM Siow said the gold price at present was lingering around US$1,650 per ounce and could hit US$1,800 per ounce this year.

“Although it is a bit lower than the price in 2011, which saw the gold price hitting US$1,920 per ounce, it is still stable and expected to rise further,” he told Bernama in an interview.

He expected gold price to start climbing by end-February or early March.

“There are few reasons for this. One is, investors will stock-up their gold, to take advantage of the lower price, before the Indian government makes any announcement on the import duty.

“As Chinese New Year is due in February, a lot of jewellers will start buying to stock up on their inventory which will boost the physical demand for gold,” he added.

“With the uncertainties in the global economy and moves by major Central Banks to keep interest rate low, people are no longer keeping their money in banks.

“In fact they started to purchase gold as an investment as it was on an upsurge recently and is the best vehicle to hedge against inflation,” he added.

Siow, who is also Poh Kong Holdings Bhd’s executive director, said gold for investment made up almost about 40 per cent of the world’s demand,  compared with less than 20 per cent in early 2000.

“I assume the trend for this gold investment will actually be maintained, if not pick up,” he added.

On Poh Kong’s position, he said the actual percentage of people looking to invest rather than go for jewellery, has slightly increased.

Therefore, he said Poh Kong was also offering investments in gold waffle, starting from one gram to one kilogramme.

Asked about the difference between investing in gold through jewellers and through the banks, Siow said in term of price, the latter will probably give a more competitive pricing.

“But there are some limitations where investors must buy in cash and the business hours are limited.

“Jewellers like us are open everyday until 10 pm. We offer a easy payment scheme and it is much easier for you to sell back to jewellers than to banks,” he added. — Bernama