Thursday, July 7
You are at:Home»Sports»Kings once more 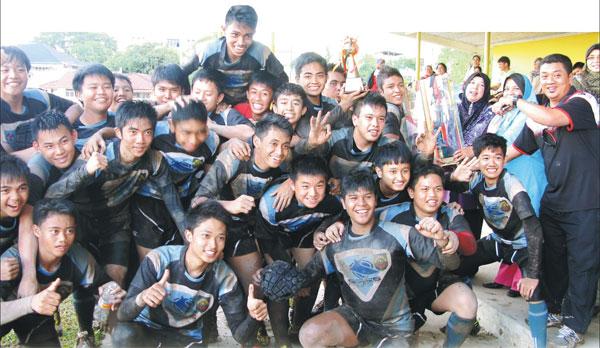 THREE IN A ROW: Kolej DPAH Abdillah players and coach Zamzy (right) celebrate their victory as Christopher receives the challenge trophy from Norlela (third right) during the prize presentation.

This was the third consecutive year that the Kolej boys have won the event and they brought home the challenge trophy.

The game was affected by the soggy pitch which made running difficult as both teams struggled for an early lead.

It was Kolej who broke the deadlock in the 24th minute when Ronald Sulau made a try after charging through the SHOAW lines.

After the breather, both teams continued to attack each other relentlessly but failed to score more points.

Christopher had a penalty kick in the 45 minute but failed to convert. The scoreline remained until the last whistle.

Kolej coach Zamzy Abdul Rahman was proud of his boys for achieving a hat-trick of wins and congratulated them for their excellent performance.

“It was a good game and we had a good fight from our opponents and my boys had played their hearts out to win,” he said.

Zamzy felt that it could have been a better game if not for the poor condition of the pitch.

“We couldn’t play a running game as the pitch slowed down play,” he added.

The coach attributed his team’s success to good teamwork and committing less errors.

Despite losing to Kolej, SHOAW coach Zulkaranainhisham Sarbini was still happy with the performance of his team, saying they played well and had managed to defend well.

“We had our share of attacking but we failed to convert the attacks into points. On numerous occasions, our boys were only one or two metres away from the touch line and failure to score caused much frustration among the players,” he said.

“Overall, it was a good game and we congratulate Kolej for winning the title for the third consecutive year,” said Zulkaranainhisham, promising that his team will come back a stronger team next year.

The score at half-time was 14-0. SHOAW principal Norlela Bujang gave away the prizes.

This event was jointly organised by SHOAW and the Sarawak Education Department and was aimed at selecting players for the MSSM Inter-Division meet to be held in Betong in Jan 28-31.