Tuesday, May 24
You are at:Home»News»Sarawak»Residents unhappy with road to longhouses 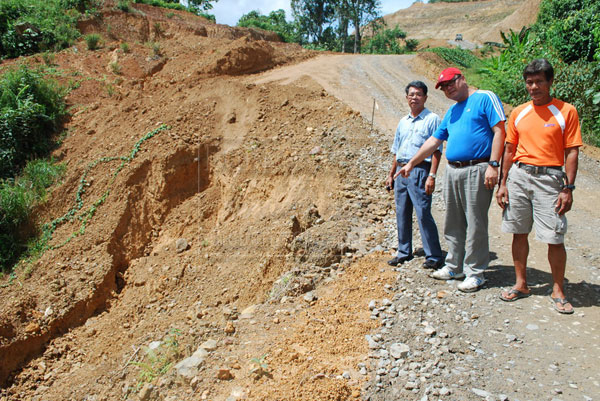 DANGEROUS: Gerosen (centre) points out one of the dangerous sections that lead to their longhouses, which puts the lives of residents at risk every time they use the road.

BINTULU: The residents from four longhouses in Nanga Tekalit Tatau here yesterday expressed their disappointment over the construction of the 9km road leading to their longhouses, that it is not being properly maintained by the appointed contractor and not completed within its specified schedule.

According to Tuai Rumah Gerosen Jubin, the road project, which is under the National Key Result Area (NKRA), began   in February 2011 and was to be completed in February. However, the road does not look as if it will be completed on scheduled.

“The road construction project that costs more than RM10 million from the federal government could be completed earlier as
it gets adequate provision from the government.

“However, the situation now shows otherwise because the road is not paved yet, poor maintenance especially on drainage and hill terraces along the route damages the road and also the risk from landslides makes it unsafe,” he said.

Hence, he said, the contractor  should maintain the road in order to give safer access to some 100 families from the four affected longhouses, namely Rumah Sigan Renggi, Rumah Michael Junus Rekan, Rumah Abong Sadam and his longhouse.

He said the road is also a vital link to SK Begiau, for teachers and staff to commute without having to use water transport.

Former community leader in the area, Pemanca Segaya, 78, hoped the agency concerned would make every effort to complete the road construction as soon as possible as it is not safe for the local residents to use, especially those with small vehicles, in its present condition.

“The contractor should build the road according to the specifications and even though the road is not fully completed they should come up with quality maintenance, build proper drainage on both sides of the road to drain away the rainwater,” he said.

They (contractor), Segaya said, should give priority to the safety of about 100 families who use the road daily.

Banyang Luyang, 48, in the meantime, hoped those responsible could speed up the construction work because it is an important route that connects the local residents with Bintulu town.

He added there was no reason it cannot be completed according to specifications in a timely manner because the federal government had allocated sufficient budget for the project.