Tuesday, May 17
You are at:Home»Business»RHBIM launches RHB Retirement Series Scheme 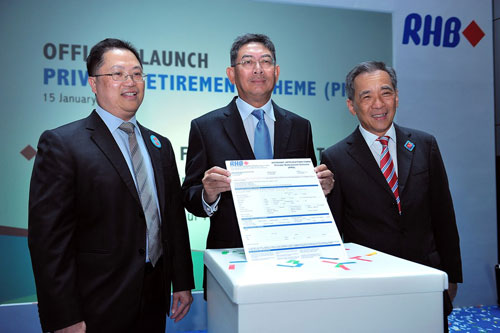 RHBIM is one of the eight PRS providers appointed by the Securities Commission Malaysia earlier this year.

“There’s a huge financial gap between savings for retirement and leading a sustainable lifestyle post retirement for many Malaysians. Most of our savings for the golden years might not be able to last throughout our retirement due to the longer lifespan and rising cost of living.

“With the PRS, Malaysians now have another means of closing this gap as it complements their existing retirement plans. The PRS also opens up another channel for us to tap into a huge potential market which is in line with our Group’s mission of becoming the preferred private retirement destination”, says Anthony Siau,  acting principal officer of RHBIM.

“With RHB, members can start contributing from as low as RM100 with any of our core funds making it an affordable option especially for the lower and middle income earners. There is also no sales charge for now as we try to encourage more people to save for their retirement,” added Anthony.

RHB Bank, the primary distributor of the RHB Retirement Series, has nearly 190 branches nationwide, giving the general public easy access to the services of its trained personnel. In addition to the bank’s wide branch network, RHBIM has a wealth of experience in fund management.

RHBIM is a wholly-owned subsidiary of RHB Investment Bank and currently has a stable of 23 retail funds.