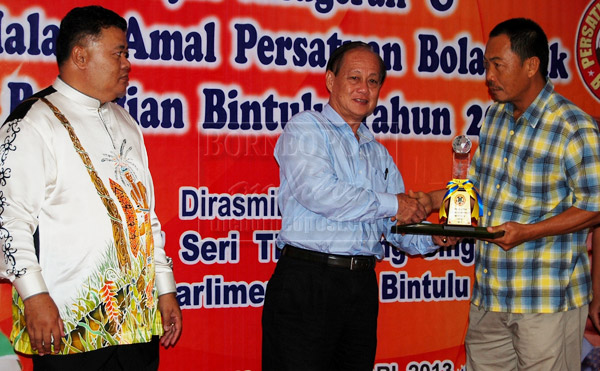 He announced that more activities will be implemented this year to further boost the role of Bina in developing the sport here.

“We are expecting Bintulu to be the host for the Sarawak Club Champions League and other local leagues such as Bintulu-Naim League, Petronas Invitation Cup, Datuk Seri Tiong King Sing Cup and Datuk Dr Stephen Rundi Cup,” he said when speaking at the Bifa awards and charity dinner here last Saturday night.

He also noted that since its inception in 1987, Bifa’s registered membership of players and officials has grown from only 120 to 650 from 29 teams in Bintulu now.

Duke added that their members have also demonstrated social responsibility by continuously organising various charitable activities to help the needy.

The BIFA 2012 Figure award was presented to Nyipa Tinggang, the former president of Football Association of Sarawak (FAS) and Bifa from 2005 to 2011.

Dahlan Matusin, former ‘ngap sayot’ player in the 1980s who has been coaching local teams since 2006, was awarded the civic leadership coaching award. He was credited for producing 6 top players who represented Bintulu in the Sarawak Cup.

Under-25 player Nelson Menila and Under-18 player Favean Lauren Linang were also among the award recipients.

The awards and donation to 30 orphans were presented by Bintulu MP personal assistant Teo Ho Ping.