Sunday, September 20
You are at:Home»News»Sarawak»Students resort to gangster tactics to resolve issue 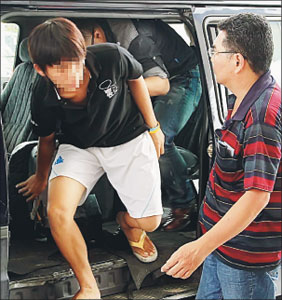 GETTING DOWN: A student nabbed to help police in probing an arson case.

SIBU: The police here were shocked by three secondary students resorting to gangster-style violence to resolve an issue with a schoolmate.

The boys, aged 17, had tried to torch the house of their schoolmate when he failed to pay enough for damaging a motorcycle belonging to one of them.

The trio threw three Molotov cocktails into his house at Lada Road at 2am on Thursday. Two exploded, damaging a car and partially destroying a roof.

Lanang police arrested the three boys yesterday: the first was caught at noon and the other two more than two hours later.

Police said the four boys stayed in the same neighbourhood at Lada Road.

The cops believe the violent crime was sparked after the victim returned the motorcycle he had borrowed from one of the three.

The motorcycle owner alleged his machine had been damaged and asked for compensation.

The boy did not pay so the owner complained to his mother who gave him RM100.

The owner was unhappy with the amount of compensation so he and his friends resorted to arson.

In an unrelated case, a teenager was caught red-handed for breaking into a house at Bukit Lima Timur while his partner in crime escaped.

Police know his identity and are expected to arrest him soon.

The crime occurred before daybreak when the wife of the owner went marketing, leaving her husband and two children sleeping.

When the woman returned at 6am, she received a call from a neighbour, saying two boys had intruded her house and were probably still inside.

Afraid to enter her house, the woman called her husband.

When her husband opened the bedroom door, the two teenagers were frightened. One fled while he caught the 18-year-old whom he handed over to the police.

Police said the boy had a criminal record. They believed he had been involved in a series of house breaking thefts.  They said he was getting more daring as they intruded into the house at dawn in yesterday’s crime.

The 18-year-old led the police to a house at Chong Sang Road to seize some items he had stolen in earlier thefts.

A youth was arrested in that house. Police believe he had been receiving stolen goods from the teenage thief. The youth will be remanded.