Saturday, August 15
You are at:Home»News»Sarawak»The hot spring with potential to heal 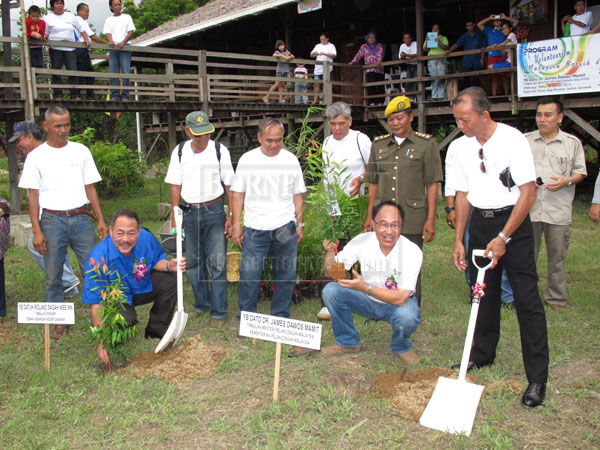 KUCHING: Panchor Hot Spring in Kampung Panchor, over 40km from here, is said by some to have the potential to heal those suffering from heart disease, diabetes and high blood pressure.

Deputy Tourism Minister Datuk Dr James Dawos, who pointed this out yesterday, said he has met two persons whose helath improved after frequenting the hot spring.

“A woman I met in Paku yesterday told me she brought her husband to Panchor Hot Spring weekly for three months as he suffers from heart problems.

“She said after three months, her husband became better. It goes to show that the hot spring has some healing properties. There could be more success stories being spread around,” he said at the ministry’s voluntourism programme themed ‘1Malaysia Clean and Green 2013’ at Panchor Hot Spring yesterday.

Dawos said a couple of individuals from northern Sarawak used to seek treatment for their illnesses at the hot spring.

“At one point, there were people who came all the way from Lawas for a cure at Panchor Hot Spring.

“This is why the Tourism Ministry has upgraded the hot spring for all to stay healthy and happy.”

Panchor Hot Spring is a community-based tourism project developed by the ministry at a cost of RM450,000 and completed in May last year.

According to Dawos, further enhancement work at the hot spring will be looked into. For the time being, both men and women share the same pool of natural water.

The ministry is looking at introducing a women’s section for more privacy.

On community-based tourism project, Dawos called on various local communities in Sarawak to inform the ministry of any interesting places and products to be promoted.

“If you have seen some special species of bird in any part of Sarawak, tell us; if you have discovered a waterfall, let us know and we can turn them into a tourism product.

“We want more locals to get involved in community-based project work. The ministry is keen to promote this for it is in tandem with elevating the socio-economic status of our people.”

On Panchor Hot Spring, he suggested that locals come up with a plan to develop a hotel and resort around the area to draw visitors.

Towards this end, he agreed the government would have to upgrade the connecting roads in Kampung Panchor as well as provide electricity supply and carparking facilities.

“Everything is under planning and we will implement them in stages,” he added.

Earlier, Tarat assemblyman Datuk Roland Sagah Wee Inn reminded residents in Kampung Panchor that Barisan Nasional government fulfilled its promises and would continue to reach out to the rural populace.

“Unlike the opposition, we help our people by helping them generate more income.

“The opposition is good at picking minor issues, which are not genuine but aimed at taking down the government of the day.

“Some impertinent issues can be stirred up by the opposition and sensationalised. But our people do not appreciate sensational issues as they want development and higher income.”

Over 200 people in Kampung Panchor attended the event to heighten awareness on keeping the hot spring clean and green for all.