Wednesday, February 1
You are at:Home»Columns»Other Columns»Remembering Yaman, a brilliant artist
For the freshest news, join The Borneo Post's Telegram Channel and The Borneo Post on Newswav.

He is survived by two children — Rashid and Rokiah — as well as an ex-wife Jasmin Fujiko Bennette who lives in England.

Yaman had contributed so much to the art scene in Sabah as well as the state government in his own ways that it is difficult to start remembering him as this man or that artist.

I met him in the mid-1980’s in his office at the Sabah Art Gallery, Sabah State Museum area, when I first started working with the media.

My first impression was how knowledgeable he was about art and how dedicated he was in promoting art appreciation in the state.

Subsequent meetings through the course of my work occurred through the years and the lasting impression I have of him is his incredible dedication to the art scene in Sabah. 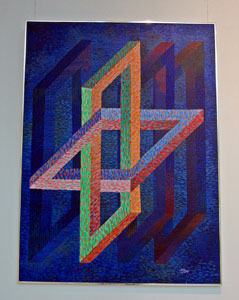 ARTISTIC: One of Yaman’s drawings.

This soft-spoken man, who had a smile for anybody who approached him, fought hard for a Sabah Art Gallery building — a place centred and focused on art.

To know him, one can read up on author Ismail Ibrahim’s book simply titled Datuk Mohd Yaman Ahmad Mus. 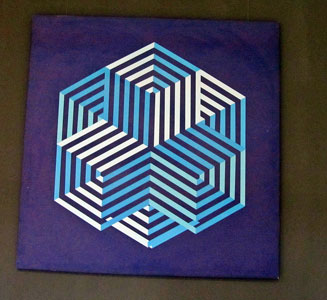 SYMMETRICAL DESIGN: Another of Yaman’s creations.

Yaman was born in Kampung Tebongon Putatan on Sept 29, 1938, the third of four children. He had always been known for his artistic side since he was a child. He saw his first painting on the wall of a school in Buit Hill in 1949 where he studied back then. The paintings were by Murshidi Nambi (Datuk).

At the age of 13, he enrolled at All Saints School Jesselton on scholarship and studied arts under Simon Yew (Datuk) who had just transferred from Sandakan.

Yaman began to draw cartoons and comics when he was in Form Four. His works were published in the 1950’s and 60s, including the Adventures of Tom, featured in the Journal Anak Sabah and Tiga Serangkai in the Utusan kanak Kanak publication in then Malaya, while his Pa Lang comics were published by Majalah Salam of Brunei.

His illustrations also graced the pages of history and story books.

In 1958 when Yaman was in Form 4 at All Saints, he teamed up with an English teacher, Oliver Beaven, to form the Sabah Art Club. From 1959 to 1963, Yaman headed the Club as president.

He received his General Certificate of Education (GCE) scroll from Prince Phillip, the Queen’s consort in 1959.

The Prince was on a visit to the state at that time, and in 1963, Yaman left for England to further his studies. 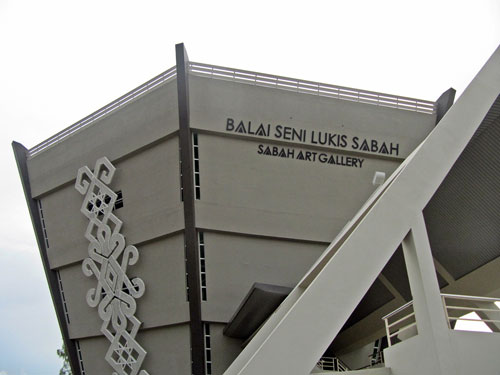 He studied in Croydon College of Art under sponsorship from the Liberal Educational Trustee funded by the Japanese government as compensation to Sabah’s World War Two experience. Yaman was the first person to utilise such funds.

From 1963 to 1965, Yaman went through various learning process to assimilate a foreign culture which in many ways enriched his knowledge and artistic acumen.

He went on various visits, including study tours to Paris, Milan, Italy and Florence. This was part of a learning process, organised by the Croydon College of Art, London, to expose students to famous galleries, including Louvre where the famous Mona Lisa painting is displayed. 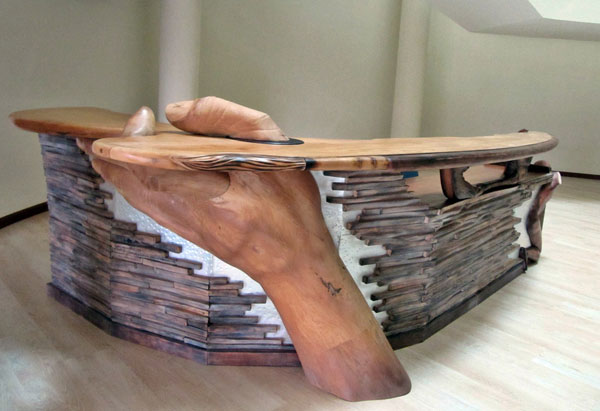 In 1967, Yaman married Jasmin Fujiko Bennette. Three years later (1970), he returned to Sabah with a first class honours degree in art and design. He worked as the Arts Department head in Gaya College until 1975, and also in the same post at the Native Voluntary School from 1971 to 1973.

Various activities to promote art appreciation and encourage artists in Sabah were carried out by Yaman and his friends, including Mohktar Ali, Liew Fui, Junaidi Ismail, Robin Lo and Francis Cheong at that time.

He returned to England with his family in 1975 and worked as a graphic artist in Blackpool. After five years he returned to Sabah and promptly got involved in the Centenary Celebration of Sabah. He was the administrative officer in one of the Chief Minister’s departments.

He carried out his work diligently, looking after 400 committees throughout the state. The celebration was a hit at that time.

His passion for art and its development in Sabah never waned, and in 1982, he sent a letter to the then Chief Minister Datuk Harris Salleh (Tan Sri), requesting a budget.

Subsequently, Harris issued an order to allocate Yaman a venue to accommodate the latter’s proposed project of setting up the Sabah Art Gallery.

After a series of negotiations, the curator of the Sabah State Museum agreed to allow the Gallery to be sited in one of its building.

In 1984, the Sabah Art Gallery at the Museum area was opened to the public and it held its first exhibition on April 11 the same year.

Yaman’s dream had come true. From 1984 to 2012, the building was the exhibition area as well as office of the Sabah Art Gallery.

Yaman wanted to go further and never gave up hope to give the Sabah Art Gallery’s its own building. He worked very hard to obtain a site for the building and achieved it in 2012 when the Gallery was shifted to its new location at Mile Two Penampang Road, near the National Archive.

The building has long been in the making and it was built brilliantly with creative and innovative features as expected of an art gallery.

Sabah Art gallery manager Jennifer Linggi shared that construction of the new building was carried out meticulously to depict the many ethnic arts and motifs of Sabahans.

The four-storey building is like an upside down sirung (traditional hat) with its six points pointing skyward. There is, of course, a rationale behind this building, besides the aesthetic.

This area – 500 square metres, is where exhibitions are held for every function and event. The space is quite ample and can accommodate hundreds of paintings at any one time.

The third floor is also an exhibition gallery called Yaman Gallery, named after the founder and former director of Sabah Art Gallery who had worked hard and long for this establishment. His works are on display there presently.

Besides the spaciousness and uniqueness which are the main highlights, the other feature of the building is the solar roofs that power the whole area.

It utilises sensors for lights and lightings. Additional lights will only be switched on when there are people in the designated area. After the people leave, the lights will go off — with only basic lightings left on. This is a power-conserving system.

There is also a system that harvests rain for use in the washrooms, landscapes and ponds. Motorists using hybrid cars have an advantage as there is a charging kiosk available.

The building is environment-friendly and has since been recognised by the Malaysian Green Building (MGB) Assessing Committee and awarded with the Silver Award for its efforts to promote environmental friendliness.

“We are very happy and proud of the building because of its spaciousness and its various features. We are sure the objective of the gallery to collect, store, preserve, interpret and exhibit both local and foreign works of art will be met. We will ensure that the quantity and quality of our collections will be maintained holistically while we promote the appreciation of art in the state,” Jennifer said.

“We will carry out the vision of our former director Datuk Yaman to make art in its various forms an entity that is close to the hearts of art lovers and the people as a whole. We will also ensure that we grow from strength to strength in ensuring that our art heritage is

An exhibition, to be held in conjunction with the building’s official opening, dubbed Yaman and Friends, featuring Yaman’s artworks and those of his friends Benedict Chong, Richard Lim, Robin Lo, Professor Ismail Ibrahim and Datuk Murshidi Nambi, will be an apt  tribute to a well-loved leader on the local art scene.

The establishment Yaman fought so much to create, standing tall and proud, is a testimony to the perseverance of this affable soft-spoken man, who never gave up.

DATUK Mohamad Yaman Haji Ahmad Mus was well known for creating the designs of badges and insignias for dignitaries in the state.

He was the designer of the Sabah Flag and an artist who painted in various medium. He passed away, leaving a legacy for artists – one of love, perseverance and drive for the development of arts.

Matthews Aziz, 60, a retired civil servant who used to work with the Radio television Malaysia (RTM) Sabah, will always remember Yaman as an amiable person who liked to chat about arts.

“He seemed to be working all the time and I used to badger him to go out for coffee,” he said, adding that he knew Yaman from a long time ago in Putatan, and is familiar with his works.

“I’m privileged to know him and I would like to say he had contributed a lot to promote the appreciation of art in the State,” said Matthews who is also an artist.

Benedict Chong, 62, a very talented artist who loves painting Mount Kinabalu, said he admired Yaman for his creativity and his love for arts.

“He worked so hard for artists to ensure that they have a place to showcase their works. He must have been sad at times that not all his efforts were fruitful, but I believe he had achieved much in his lifetime,” Benedict said, adding that he had known Yaman for many years and had always admired and appreciated the artist for his quiet

perseverance in achieving his goals, especially in setting up the Sabah Art Gallery.

Robin Lo, 70, a former art teacher of St John Tuaran and a well-known artist in the state, said he knew Yaman since their teaching days.

“We met regularly through the years where we talked about arts and the development of arts in Sabah. I remember when we got the exhibition area for the Sabah Art Gallery at the Museum area. We did not have enough paintings to exhibit.

“He was quite concerned at that time, but we worked together and I brought all my works from home and added to the displays in the gallery. And we pulled it off,” Robin recalled.

He said he would always remember Yaman as a friend and a good artist as well as one of the pioneers in art appreciation in Sabah. 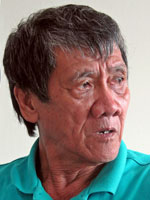 Yaman’s only son, Rashid Yaman, 42, a computer programmer who lives in Manchester, England, said:  “I will always miss him. My father was a good man, gentle and kind.

“I was born in Sabah, and at the age of three, we moved back to England.

“My dad was with us for five years before returning to Sabah.

“During those five years he was with us, I remember him as this kind father who would always speak to me and try to answer all the questions I had.

“If he did not know, he would find out and let me know later. I have so many memories of him that I don’t know which one I could share – only that he was a good father.

“He was also such a fun person to be with and people naturally gravitated to him. During my wedding in 2003, he charmed our guests, friends and family,” Rashid added.

“In the early years, he would come to visit us in England, but afterwards, it was more us, my sister Rokiah and I, who would come here. He usually wanted us to come along when there were government functions like the National Day so that we would have a glimpse of the life here.

He seemed to be more in his elements here and looked more relaxed and happy.”

Rashid said he would like the people of Sabah to remember his father as a person who had contributed much to the art development in the state, having nurtured many talents during his tenure as art director.