Saturday, February 22
You are at:Home»World»Brazil mourns victims of nightclub fire 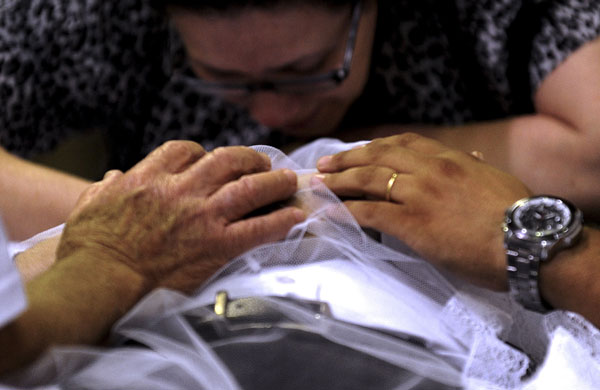 IN GRIEF: Relatives hold the hand of a victim, killed in the Kiss night club fire. — AFP photo

SANTA MARIA, Brazil: Brazilians yesterday were mourning the victims of a nightclub blaze in a small college town that left more than 230 people dead and over 100 injured, with many still fighting for their lives.

Shocked survivors, mostly science students in Santa Maria, described how scores of revelers were trampled to death or succumbed to smoke inhalation as blocked exits and rising flames caused panic.

Officials said 233 people had been killed, with 116 more injured. Health Minister Alexandre Padilha told reporters the government’s priority was “saving the lives that we still can save.”

Brazilian President Dilma Rousseff, visibly shaken by the news, cut short her visit to the Europe-Latin America summit in Chile to fly to the town.

Brazil cancelled an event yesterday launching a 500-day countdown to next year’s World Cup tournament, and the disaster will raise concerns about public safety as Brazil also prepares to host the 2016 Olympic Games.

The fire broke out around 2am Sunday when the nightclub was hosting a university party.

Survivor Michelle Pereira said a member of the band had lifted a flare into the air, which set the ceiling on fire. Flames quickly engulfed the entire room.

“Everyone was pushing and shoving,” another survivor, Taynne Vendruscolo, told reporters.

“The fire started out small, but within seconds it exploded. Those who were close to the stage could not get out.”

Santa Maria fire chief Guido de Melo said many people were trampled in the rush to get out. Others were suffocated by the smoke.

Club security had blocked people from leaving, sparking a stampede, he added.

Customers said guards at the club had kept the fire exit locked to prevent people from leaving without paying for their drinks.

“The emergency exits did not work, and then I lost my friend in the confusion. Then a girl died in my arms. I felt her heart stop beating.”

The pandemonium inside the club soon spread outside, he said.

“The metal barriers they used to keep people in line on their way in, ended up blocking people from getting out,” Bortolotto said.

“People were bumping into each other, crushing each other, falling down. And the people who were at the back of the club were simply trapped.”

“A friend of mine managed to get out but then had a heart attack and died,” Ana Paula Miller, a 19-year-old engineering student, told AFP.

Firefighters doused the blackened shell of a red brick building with water and used sledgehammers to punch holes in the walls to get people out faster.

But for many, it was already too late.

Victims’ bodies were taken to a sports stadium, which police cordoned off to keep sobbing relatives from streaming in.

Left outside, they waited for news of missing loved ones. “My son was killed. My son was killed,” wailed one mother, just before passing out after finding his name on the list of the dead.

“I saw victims who had one side of their face melted,” Max Muller, who was walking by and started to film some of the chaotic early morning scenes from outside the club, told AFP.

“I am traumatized. It is hard to forget what I saw. People who were trying to get out who stopped to give other people CPR (cardiopulmonary resuscitation) – except they didn’t know how to do it, and they were breaking people’s bones.

“It is horrible to see so many dead people, kids, on the ground; people crying, other people throwing up, who can’t breathe.

“Some were ripping people’s clothes off to do CPR but had no idea what they were doing,” he recalled.

“It’s a tragedy for all of us, and I cannot continue here at the summit, because my priority is the Brazilian people,” a visibly emotional Rousseff told reporters traveling with her in Santiago. — AFP