Sunday, July 5
You are at:Home»News»Sarawak»Baram folk fail to hand over memo 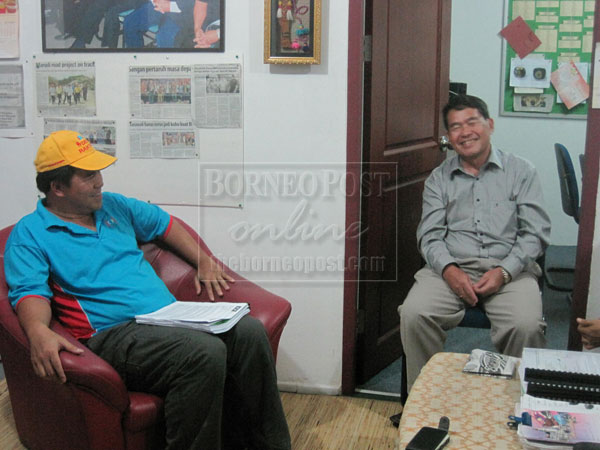 MEMO ON DAM PROJECT: Roland (left) calling on Orang Ulu paramount chief of Baram in Miri to hand over the memo on the Baram Dam project.

“We are very disappointed with our Orang Ulu community chief in Baram, Temenggong Pahang Ding, who refused to accept our Memorandum of Protests on the proposed Baram HEP Dam project,” PKR Baram branch deputy chairman and lawyer Roland Engan, representing the affected Baram folk, said in a statement issued to the press here recently.

Roland was referring to his meeting with Pahang in his office in the city at 4pm to present the memorandum documenting Baram folks’ response to building the Baram Dam.

“The memorandum contains a total of 7,418 names and signatures of all those opposing the Baram Dam project,” said Roland who described it as proof the Temenggong’s previous public statement that all Orang Ulu in Baram had agreed to it was not true.

Roland, a native of Long Jeeh, Baram, revealed that PKR Baram and the Baram Protection Committee led by chairman Philip Jau had collaborated to collect the signatures during the Baram Waves event in Long Lama, Baram on Jan 20.

“We visited all villages along Baram River which would be directly affected by the proposed dam, and were supposed to hand over the memorandum to the Temenggong on the last day of the boats’ rally from Lio Matu, but he couldn’t make it,” he said.

Although Pahang did not accept the memorandum, Baram folks had responded by refuting claims they ever consented to the dam project.

“We have given the Temenggong due notice and hereby gave him an ultimatum to call for an emergency meeting with all parties concerned to discuss the protest by Baram folks in two weeks,” he said.

Roland also called on the Temenggong to stop making public statements that imply the Orang Ulu community in Baram consented to the proposed Baram Dam.

“We respect the Temenggong as the paramount chief and appeal to his sense of responsibility to safeguard the Orang Ulu community in Baram,” he said.

Roland said having failed to get the Temenggong to accept the people’s wishes, PKR Baram together with Baram folks shall proceed to challenge the dam project, including making it a political issue, organising demonstrations and blockade.

“Henceforth we shall ignore the Temenggong’s role in all matters pertaining to Baram Dam,” he said.