Wednesday, August 12
You are at:Home»News»Sarawak»Surrey bikes set to wow riders in Kuching 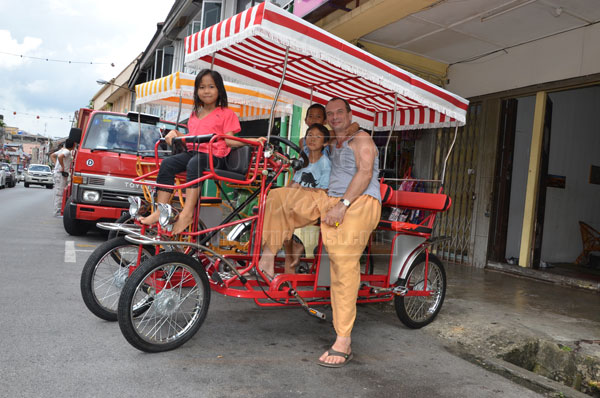 ENJOY A FAMILY RIDE: Loew and his three children posing in a four-seater Surrey bike which has a little shelf in front.

KUCHING: Fancy soaking in the sights of Kuching city in a relatively novel way? Then try pedaling a Surrey bike, or quadcycle, which is very popular in Austria.

A Surrey bike is a bicycle with four wheels, and it comes complete with bench seating, a brightly-coloured roof and two steering wheels.

“Plus, we can push for a greener Kuching.”

Loew added that Surrey bikes were very popular in Austria, which had implemented the park-and-ride system to promote a car-free city. 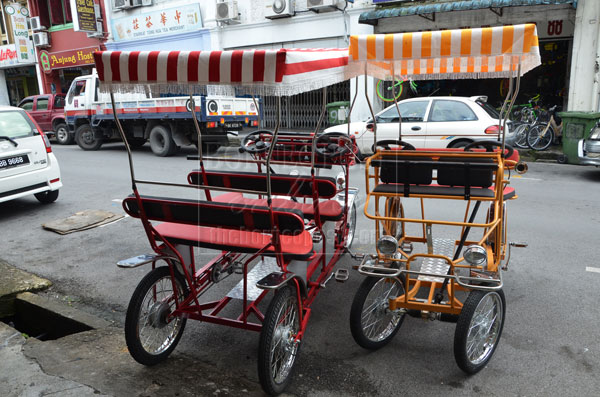 UNIQUE: The two-seater and four-seater Surrey bikes parked in front of the shop in Eu Hai Street. FIRST IN KUCHING: Loew poses in a yellow two-seater Surrey bike. This bike can be rented for leisure riding around the city for RM20 per hour.

“It is a great and fun way for the whole family as well as visitors and tourists in groups to explore Kuching city at their own speed, move around conveniently, while exercising at the same time.”

Loew added that he picked up his children from school with a Surrey.

“Drivers on the road are very courteous. They do give way, which is great.”

Loew, who is also a therapist dabbling in alternative medicine, arrived here four months ago with his Kelantanese wife Maizan Mahasan and three children.

“I am still trying to set up my clinic here and this is a side business to supplement the income,” he said, adding that they were in Indonesia for 20 months before deciding to move again.

Asked about the cost of the bikes, he replied: “It is quite expensive because they are hand-made. They are priced between RM7,000 and RM8,000 ringgit, depending on the size.”

Surrey bikes can accommodate between two and eight people, and there is a small shelf in front which is often used for small children.

Loew said he would be decorating the bikes with lights for night riding soon.

Rentals are available at between RM20 and RM25 per hour.

He encouraged everyone to take his Surrey bikes out for a spin.

“We want you to simply enjoy the ride.”