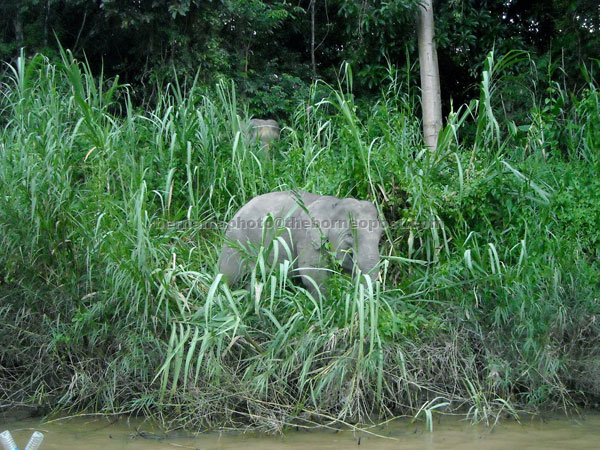 BEAUTIFUL CREATURES: Pygmy elephants feast on the green shoots and leaves by the riverbank. — Bernama photo

KOTA KINABATANGAN: Recently, this writer and several media representatives had the opportunity to take part in a programme in Sungai Kinabatangan, Sandakan, Sabah.

We took this opportunity to look at wildlife in the area by taking a boat ride along the river from Kampung Skau.

Just as our boat made a turn, moving out of one of the river streams, the boat guide gave a signal.

He flapped his hands by his ears and smiled.

“There are some elephants further ahead. We may be able to see them eating by the bank before it gets dark,” said the boatman, who was in his early 20s.

Many elephants live on the island of Borneo. While male Asian elephants can grow up to 9.8 feet (3.0 metres), female Borneo elephants grow to less than 8.2 feet (2.5 metres), according to the World Wide Fund for Nature (WWF). These elephants also have larger ears than ordinary elephants. They have longer tails too.

This writer was anxious to see pygmy elephants for the first time. Borneo, the world’s third largest island, is home to pygmy elephants. These elephants require mineral salts and water.So, it is important that they stay near water bodies.

However, they should not be close to water bodies that are crowded because it will lead to more conflicts between humans and wildlife.

Satellite tracking along the tributaries of the Kinabatangan river has revealed a drastic decline in the number of elephants because of deforestation.

Unfortunately, forests, which are habitats of these elephants, are being destroyed by lumberjacks and oil palm plantation companies.

Conservation groups, such as the WWF, are working closely with local wildlife agencies to set up sanctuaries in suitable habitats in the heart of Borneo.

Pygmy elephants are smaller than other elephant species.

Loud noises made by pygmy elephants can be heard from the river.

The green bushes on a slope nearby were shaking vigorously although there were no strong winds.

A few metres from our boat, we saw two other boats with tourists.

“Look at those elephants. They are smaller than elephants in zoos,” said one of the passengers, after watching a playful and a young pygmy elephant eat some green shoots.

The pygmy elephant is the smallest elephant in the world.

The males rarely grow beyond 2.5 metres in height, while a large female elephant is about 2.9 metres tall. These elephants do not act violently in the presence of humans.

“They have straight tusks and long tails,” said a teenager from another boat nearby.

Only the male pygmy elephants have tusks. When other boats were about to turn back, a female elephant walked towards the
river to take a bath.

It had decided to take a dip and we were privileged to witness this rare scene in the wilderness. The pygmy elephant looked adorable as it walked into the river.

When the female elephant was taking a bath, other elephants were busy eating vegetation on the slopes. An elephant needs more than 200 kg of food every day.

Many pygmy elephants living in the Lower Kinabatangan Wildlife Sanctuary suffer near-fatal injuries because of illegal snares laid irresponsibly by hunters to trap these animals. — Bernama