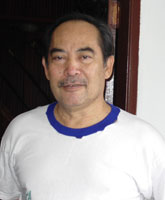 He died at 7.05am at the Sarawak General Hospital.

He was diagnosed with colon cancer sometime in middle of last year. Since then, he had gone through two operations to remove part of his colon.

“He fought bravely till the end. For the past couple of days, he never complains of any pain although deep inside we knew the excruciating pain he endured after we found out that the cancer had spread.

“At the hospital, he told us to get his clothes from home. Those were his parting words,” said his wife Angela Austin, when relating the final hours of the late Gomez   at SGH emergency ward.

He had also disclosed to friends his dying wish of being laid to rest at the Heroes Grave at Jalan Taman Budaya here.

The late Gomez received his PGB at the age of 24, following his heroic effort in a skirmish with 18 communists in the deep interiors of Ulu Poi, Kanowit at the peak of the insurgency in Sarawak.

Gomez’s police stint started when he was seconded to the Border Scouts in 1971 after attending jungle warfare training in Bukit Siol here. He was later posted to Sibu which would eventually become part of the Rejang Security Command (Rascom).

He was asked to form the Special Branch Probing Unit during the height of the insurgency. He left the Border Scouts in 1976 and was posted to the Crime Investigation Department (CID) and SB.

After his resignation in 1980, Gomez went on to read law at the University of Buckingham London. He was subsequently called to the Bar of Malaya and also Bar of Sabah and Sarawak. He also had experience in acting when he was cast to act in a film called ‘Farewell to the King’ featuring legendary Hollywood actor Nick Nolte in 1989.

While still being a lawyer, Gomez served as the third secretary-general of PBDS from 1995-1997.

He is survived by his wife, a 13-year-old son and a daughter who lives in London.