Friday, June 25
You are at:Home»Features»Sowing seeds of self-reliance

AS the seeds at a farmlet sprout and spring into life, turning greener with each passing day, so do hopes of a better life soar for Lau Tim Eng. 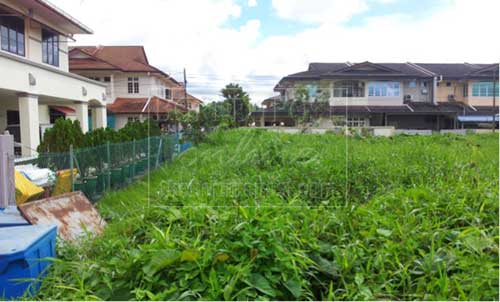 ABANDONED: Before the Sungai Apong Community Farmlet (SAFC) site was cleared, it was overgrown with lallang and weeds.

It will be another two months before the 51-year-old can harvest but the wait will be well worth it.

Right now, she is contented just to be at the site – making sure the weeds do not overgrow, the pests are kept at bay and the vegetables are growing well.

If everything goes as planned, Lau hopes to reap a bountiful yield that will rake in as much as RM1,500 per month for her family.

The income means a lot to Lau, now surviving on RM390 per month – RM150 from government disability aid and RM240 from selling chilis she plants in the compound of her own house – plus a daily meal supplied by the mobile soup kitchen from the Society of Kuching Urban Poor (SKUP), a benevolent NGO formed three years ago. 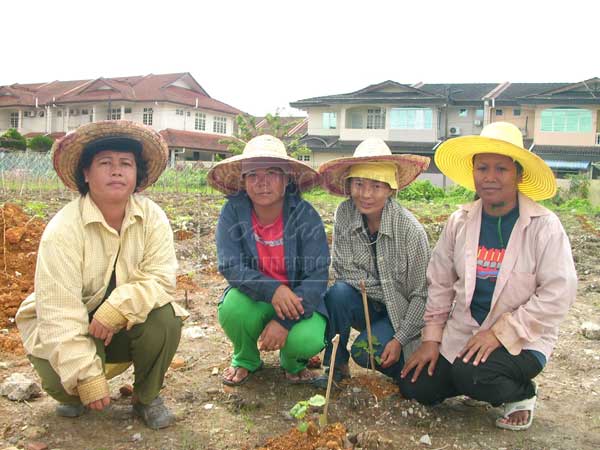 NURTURING A DREAM: (From left) Milie, Ticha, Lau and Rohana are among seven women learning how to farm at the Sungai Apong Community Farmlet. The first harvest is due in two months.

The 1.5-acre farmlet offers hopes not only to Lau but also six other women – Milie Aban, Ticha Seli, Rohana Abdullah, Farida Edward, Carole Dayuk Jugak and their leader Sim Ah Siok who are all struggling to support their families.

These seven women have been entrusted with the Sungai Apong Community Farmlet (SACF) in Kuching and they turn up faithfully everyday to tend the vegetable gardens from 8am to 10 am and from 2pm to 4pm.

They are pinning their hopes on the farmlet, now planted with chilis, ladies fingers and other leafy vegetables, to help them break their present near total dependence on welfare aid and charity. Their instincts tell them in the long run, self-help is better than over reliance on others.

The seven women are in their present destitute situation because of circumstances beyond their control.

Lau’s husband has been sidelined by injury at work, and the need for regular medical attention has rendered him unfit to do any manual work.

As for Milie, 43, and her husband, the lack of qualifications and skills has left them both jobless – and dependent on produce they gather from the jungle to sell at the Sungai Apong Hawker Centre.

But the meagre daily takings are hardly enough to sustain the couple and their three children.

The husbands of Rohana, 43, and Farida, 37, are both security guards who earn about RM500 per month and with four children each, their take home pay falls far short of coping with the rising living costs.

Among them, 46-year-old Ticha’s husband is the breadwinner with the highest salary.

However, as a daily paid worker (wielder) at a construction site, the most he can take home, even in a good month, is RM600 which is below the poverty line.

The couple with their three children are now living in a container – courtesy of the contractor. 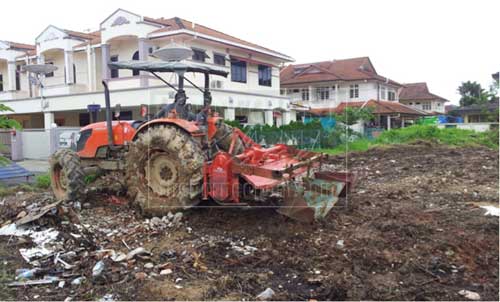 PREPARATION: A tractor clearing the land for a vegetable garden.

For the seven women, putting food on the table is almost impossible without SKUP’s daily supplement of meals but these mothers are not giving up.

Though not well-educated, they are trying their best to make life better. Given the choice, they neither want to depend on SKUP’s rations nor stay on the NGO’s help-list.

Self-reliance is foremost in the minds of the seven mothers.

“Who want to be beggars if they can help it. We have our dignity and pride. We don’t want to depend on others all the time. It’s better to learn to fend for ourselves,” Sim (Ah Siok) said.

The 43-year-old has six children. Her husband does not have a steady job. The family has been depending on SKUP’s meals for survival over the past three years. It’s something Sim is not proud of.

At her wits’ end on how to improve her family’s well-being, she sees SAFC as a ticket out of their plight, and has seized the opportunity provided by the project to learn to stand on her own feet.

To her, SAFC offers the possibility of change for the better and she has vowed to make the most of it to break out of the poverty trap.

Although she does not know how to farm, being part of SAFC has given her the chance to learn the ropes and she intends to farm on her own one day. That’s her future plan – plough the land and be financially independent. 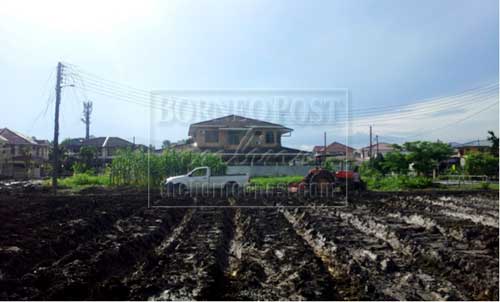 ALL SET: The land ploughed up for planting.

The struggle of the seven women is not something new or out of the ordinary. Competitive city living is about the survival of the fittest and the lack of skills or qualifications has been a major contributor to urban poverty.

It may be compounded by disability such as in the case of Lau who was born with only thumbs.

For Sim, her large family throws up a huge challenge as she has to earn a living as well as take care of her children.

Except for Lau and Sim, Faridah, Ticha, Milie, Rohana are from Simumjan but have moved to Kuching at different times.

There are many more trying to survive like these seven families in Kuching. There are now 150 families registered with SKUP which, to its credit, has been going the extra mile to help the urban poor – regardless of race and creed – since it was set up in Sept 2010.

Its objectives include providing indigent families with basic needs such as one meal a day, job opportunities, skills training and financial assistance to help them attain self-reliance.

The SACF project has broadened its scope of voluntary service beyond its initial founding objectives to embark on a plan that provides opportunities for long-term self-sustainability to the urban poor.

The first of its kind in Malaysia, SACF, once proven effective, is a model that can be extended to many other city areas to help the needy who are willing to help themselves such as the seven women now learning proper farming under the project. 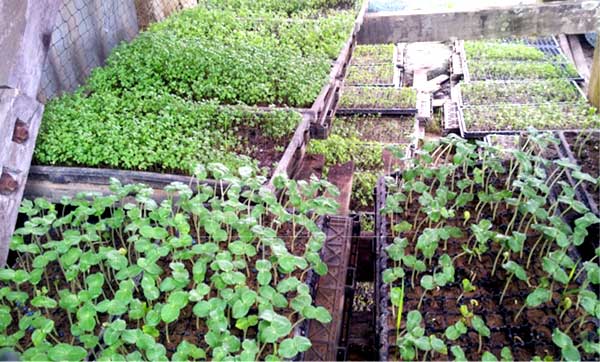 STARTING POINT: Seedlings for cultivation at the farm.

“This is a pilot scheme. It seems to work now but we have yet to see the final outcome. Once proven effective, it can be introduced to other areas,” said Prof Dr Sim Kui Hian, Sarawak United People’s Party (SUPP) secretary-general and SACF committee advisor.

The cardiologist who has been helping SKUP with donations, believes teaching the needy to catch fish is a more effective way to help them than just giving them fish. With that in mind, he worked closely with SKUP to start SACF.

Both Dr Sim and SKUP foresee the viability of SACF as an income source for most of the urban poor, originally from rural farming communities but have migrated to the city in search of a better life.

A farming project in the mould of SAFC is something they can apply their skills to. Furthermore, SKUP hopes the sales of agricultural produce will enable the urban poor to start a small business and, in the process, pick management and other skills to become more employable in a city environment.

Why are there only seven families at the Sungai Apong Community Farmlet?

“As the farm is not too big, we have identified only seven families to take care of it. That is the number the farm can support.

“We estimate each one of them can have an income of RM1,500 per month once the farm starts producing,” SKUP secretary Fabian Wong said.

In the city where land is scarce and thus expensive, the main challenge is to find land for farming.

Dr Sim managed to solve the problem by persuading the present SACF site owners to lease their land for three years – free of charge with a goodwill agreement that if the owners have no plans to develop the land, the lease may be further extended.

“It is a win-win situation. On the one hand, SKUP can help these families help themselves while on the other hand, the families can learn to be independent and stop relying on aid from others.

“As for the landowners, their idle land has now been put to good use instead of being treated as a dumping ground for discarded building materials, overgrown with weeds and even becoming a mosquito breeding ground,” Dr Sim said. 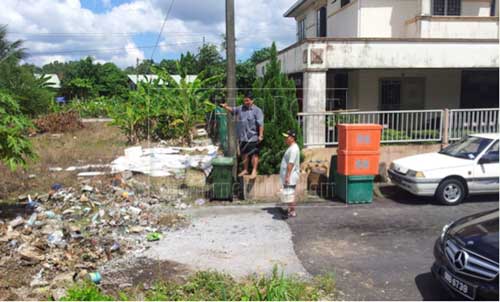 IN THE PAST: The present SACF site used to be a dumping ground.

SACF is made possible through the joint efforts and contributions of many. Apart from the involvement of a political party to facilitate the implementation of the project, and an NGO to coordinate it, the willingness of private landowners to participate without expecting any returns has also been crucial.

There are private companies such as Ceria Agriculture Services Sdn Bhd and Botanium Resources Sdn Bhd which helped clear, plough and drain the land for planting.

The Agriculture Department too has agreed to render technical assistance whenever needed.

Clearly, it takes the participation of every strata of society to tackle social problems such as urban poverty.

The have-nots must play their part by wanting to be helped while the haves must contribute whatever they can in terms of finance, effort, knowhow and technology.

It is impossible for only one segment of society to take on the heavy responsibility of eradicating a social ill such as urban poverty that is due to no fault of anyone in particular but a situation born of multiple factors.